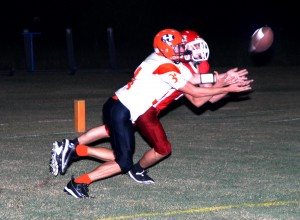 Northeast Academy receiver James Pope battles Hobgood defender John Peele for a pass, one that Pope finally wrestled away to complete a touchdown, one of many on the night for the Eagles who routed the Raiders, 56-0. Photo by Cal Bryant

Protected by the likes of offensive linemen Jake Ellis, Jacob Rogers and Willie Rose – who combine to tip the scales at 835 pounds – Northeast Academy pounded the turf to the tune of 474 total yards here last night (Friday) where the Eagles blanked longtime rival Hobgood Academy, 56-0, in their home opener.

The win was the second in as many outings for the Eagles who will travel to Wilson next week to meet Community Christian School.

The beef up front allowed the Eagles’ prime time players to shine.

Senior quarterback Davis Harrell has his hand in four touchdowns, passing for three and running for another. Davis, who gave way in the fourth quarter to reserve QB Brad Johnson, finished his night with 155 yards through the air (connecting on 5 of 7 passes) and rushing for a game high 85 yards on just five attempts.

Senior James Pope was “Mr. Paydirt” for the Eagles as found the endzone five times – catching all three of Harrell’s touchdown passes and rushing for a pair of scores on his only two carries of the night.

Senior running back Justin Francis also had a big night on a small number of carries. He toted the pigskin only four times, but covered 74 yards, including a touchdown.

Even the back-ups had success. Johnson connected on all four of his fourth quarter passes for 68 yards, including a 28-yard TD strike to a wide open Justin Lassiter that capped off the 56-0 rout with 10:20 left in the game.

Sophomore Justin Creech showed some future promise as he rushed three times for 51 yards, all in the fourth quarter.

Meanwhile, the Northeast defense was stout.

Pope, from his cornerback spot, was in on 5 tackles and also had a fumble recovery. Junior linebacker Blake Simonowich and defensive lineman Ryan Burke each had 4 tackles.

Leading 14-0 at the end of the first quarter, the Eagles put the game away over the second 12 minutes of action. There, Northeast scored three times – Pope’s 30-yard run on an end-around play; a 64-yard scamper to paydirt by Francis; and a great catch by Pope, who wrestled the ball away from a Hobgood defender at the goal line to complete a 20-yard scoring pass from Harrell.

Northeast quickly added to their 36-0 halftime when Francis returned the second half kick-off 61 yards to set-up a short drive capped by Pope’s 11-yard scoring run. Harrell added a 38-yard TD run on a quarterback draw play later in the third quarter to extend the Eagles lead to 50-0.

The Harrell-to-Pope connection accounted for both first quarter scores by the Eagles as the senior duo hooked up on TD passes covering 43 and 57 yards.

Clarice Hagbourne kneels beside a Woodland Police Department vehicle after joining those ranks as a part-time officer. A native of... read more