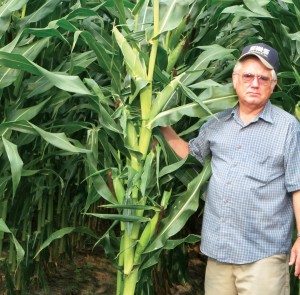 Phil White of Askewville stands beside his 12-foot tall corn, holding one stalk that has produced six ears. Contributed Photo

ASKEWVILLE – Sometimes the hard work of farming also has rewards.

Such could well be the case for Phil White of Askewville as he prepares to harvest his corn crop next week. Planted on 53 acres of land in or around Askewville, White said the corn appears to be an excellent crop.

“This is the first time I’ve had a stalk with six ears on it,” White said. “I’ve had some with four, but not six. It looks like it will be a good crop of corn.”

White said the corn is grown naturally with no irrigation and no man-made fertilizer.

“I put a lot of chicken litter to the acre and plant about seven and an-eighth inches apart,” he said. “I sprayed it with Roundup and left it alone.”

In preparing for planting, White said he simply disked and bedded the land and planted the corn on the beds.

“That’s what I’ve been doing for the last couple of years,” he said. “It seems like I can get it to come up better on the bed.”

He said he used chicken litter because it was cheaper than fertilizer and also meant that he didn’t have to put down nitrogen.

A farmer for the past 40 years, White began working in the fields as a boy with his father, Phillip White. He said he still enjoyed working on a farm.

White planted Pioneer seed corn and has had visitors from the sellers of the seed to see the 12-foot high corn stalks.

“I thought the people from Pioneer were coming too, but they haven’t so far,” he said.

White said he plans to harvest the crop next week and feels good about what he sees.

“There are a lot with four ears and three ears to the stalk,” he said. “That’s especially at the ends where the litter may have been a little thicker.

“We’ll find out for sure what we have next week,” he closed.

G.K. Butterfield: One of us?

The good and decent people of North Carolina’s First Congressional District deserve a lot better than they get many times.... read more