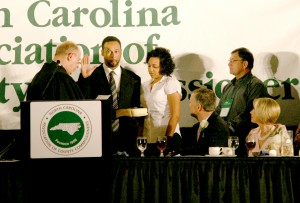 During the association’s annual meeting, held this year in Pitt County, Hunter was elected to serve in that role by acclamation. During the business portion of the meeting, Hunter was announced as the only candidate for the post.

“It means a lot to follow in my father’s (Howard J. Hunter Jr.) footsteps since he was a county commissioner as well,” Hunter said. “My uncle, Mike Espy, told me if I wanted to do something,  run for association president.

“Also, the day before DuPont (Davis, a longtime Hertford County Commissioner) passed away, there was a three-way call between me, him and (Current Hertford County Commission Chairman) Johnnie Farmer,” he added. “DuPont said during that call he wanted me to win state vice president and Johnnie to win reelection. It feels good to be able to do what both of those great men suggested.”

In addition to serving on the board’s executive committee, Hunter is now in line to move up the ranks to become president of the Association in three years. That feat has been achieved by only two other Hertford County Commissioners, the last of whom was Davis.

“After I was sworn in Saturday night, there were a lot of people who came up to me and said they knew DuPont was looking down smiling,” Hunter said.

In addition to that service, Hunter is on the Hertford County Economic Development Commission and an At-large director and a member of the Legislative Goals Committee for the Commissioners’ Association.

He was also appointed by Senate President Pro Tem Marc Basnight to the Joint Study Commission on Alcoholic Beverage Control.

Hunter is a member of the Soul Saving Station church, Kappa Alpha Psi Fraternity and Hertford County Athletic Association. He is also the secretary of the Atlantic District Fair and a founder of the Hertford County Bears Football Foundation.

“When I was younger, I said I wouldn’t follow in my dad’s footsteps, but I have,” Hunter said. “When I became I a commissioner, my goal was to serve the people of Hertford County. Going on to help serve the people of the great state of North Carolina never occurred to me.

“Now I’ve been given the chance to do both at the same time,” he said. “For that I am truly grateful.”

“I am grateful for the support of the Roanoke-Chowan region and especially my fellow commissioners in Hertford County,” Hunter added. “I especially want to thank Chairman Farmer and County Manager Loria Williams.”

One team entered into last year’s Backyard BBQ Cook-off in Ahoskie are shown during the final stages of the competition.... read more