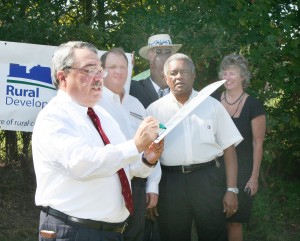 SEABOARD — “This is a great day for Seaboard.”

That was the same sentiment from everyone involved with a joint groundbreaking on Monday for a new Seaboard Town Hall and fire department facility.

Dozens of citizens joined officials from the local, county, state and federal levels on a vacant lot on the corner of Main Street and Highway 186 where in several months a new town hall will stand. Next door on another plot of land separated by a ditch, a new Seaboard Volunteer Fire Department will also be constructed.

Moss said the new town hall will be 3,800 square feet and will house all of the town’s departments, including Public Works, the Police Department and Town Council Chambers.

“It’s a great day for Seaboard,” he said. “It increases morale, the building that we are in now once operated as a grocery/merchant store.”

The new 5,426 square foot fire station will be a huge upgrade for the department. Lassiter said the building will include three bays for fire trucks, a training room and kitchenette. The building will also be prepared for future expansion with two sleeping quarters, restrooms and shower in case the department ever adds full time paid positions.

The 12 X 14 bays in the new building will also allow easier access for the fire trucks and allow the fire department to purchase better equipped trucks in the future. Newer equipment may pay off for taxpayers as it improves the fire department’s rating and lowers homeowner’s insurance.

The two projects will be funded by more than $1.2 million from The United States Department of Agriculture (USDA) Rural Development through the American Recovery and Reinvestment Act (ARRA) of 2009.

According to former Mayor Melvin F. Broadnax, the new town facility is a long time coming. The current facility that houses town staff and the police department is more than 60 years old and has space and structural issues. However, according to Broadnax, one of the first town halls came on wheels.

“We used to operate our town hall out of the backseat of a car,” he said. “We have come a long way; this is a special day.”

Broadnax acknowledged that it took teamwork to make a new town hall and fire department a reality.

“If you see a turtle sitting on a fence, it didn’t get there by itself,” he said. “Mayor Bobie Moss and the board, the staff of the town, the fire department and police department have been working hard and have done an outstanding job.”

“When we talk about urban development I become very upset,” he said “We need to focus on rural development.”

Butterfield credited USDA Rural Development for being there for small communities in need like Seaboard.

“The town of Seaboard, as great as it is, cannot build a new fire department and town hall; the five county commissioners do not have the capacity,” he said. “The agency of last resort is Rural Development.”

He noted next year’s budget will be hard as Congress looks to cut the nation’s deficit and get the federal government’s spending under control.

“My energy is focused on making sure rural communities do not suffer,” he said.

Jones said in Seaboard not every thing had to be new, specifically the popular eatery Broadnax Diner.

“Leave that just as it is,” he quipped.

He noted the ground breaking for the new town hall and fire department was something to celebrate.

“If this was happening in a larger town it would be a drop in the bucket,” he said. “When something happens in a town this size—it’s a big deal.”

Wray, who served as a Seaboard town commissioner at one time, echoed that it was a great day for the town.

He said it took a team effort to make the dream of the new facilities a reality—from Congressman Butterfield and USDA Rural Development to town officials and firefighters.

“You cannot do anything without a team concept,” he said. “Working together makes a great community.”

“If all goes well from last October 1 to September 30, the American Recovery and Reinvestment Act will have requisitioned approximately $2 billion for North Carolina,” he said.

Moss said construction is slated to begin in a few weeks with a tentative completion date within 10 months.

Chelsea Davis Jernigan “reflects” on her future as the owner of Progressions Dance Center in Roanoke Rapids. Photo by Thadd... read more