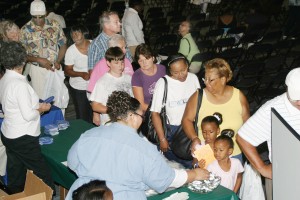 Roanoke Electric Cooperative members pay a visit to one of the numerous informational booths inside the Hertford County High School gym on Saturday, the site of REC’s annual meeting. Staff photo by Cal Bryant

AHOSKIE – In a world now dominated by economic uncertainty and environmental concerns, finding the middle ground is tougher than ever.

While Americans and others worldwide must devise new ways to meet the ever growing demands for energy, there is concern of what it will all cost. State and federal mandated renewable energy use, as well as separate climate change legislation, will impact personal finances.

Curtis Wynn, Executive Vice President and CEO of Roanoke Electric Cooperative (REC), said despite the best efforts of the local cooperative and others like it across America to find a balanced solution between remaining environmentally responsible and ensuring that REC members are provided affordable and dependable electric service, the cost of electricity will likely increase over the coming years.

Speaking Saturday at REC’s 71st annual members meeting held at Hertford County High School, Wynn laid out what he saw as the future within the business as well as measures the cooperative is taking to help its nearly 15,000 members living in Bertie, Halifax, Hertford, Northampton, Gates, Perquimans and Chowan counties.

“A significant amount of our focus has been on the future of your cooperative and the utility industry as it relates to pending climate change legislation,” Wynn said.  “We have engaged in candid straight talk with you about our efforts to encourage Congress and now the Environmental Protection Agency (EPA) to find a balanced solution.”

“We will work with Congress to craft energy policies that balance the costs of legislation with real environmental benefits,” he said.

“Because there are currently no limitations on carbon dioxide emissions, the new regulations would mandate many costly changes in the economy, especially the electric power industry. Electric cooperatives will support climate change legislation only if it creates real benefits for the environment and protects consumers from economic hardship.”

Wynn said the wrong choices on the climate change issue would have a devastating effect to the economy and the future.

In listing what he and others in his business perceive as the right choices, Wynn said electric cooperatives are committed to doing their part in the efforts to reduce greenhouse gas emissions and assert that any public policies on the issue include the following principles:

Reliable and affordable electricity to consumers and businesses.

Retention and creation of American jobs.

Equitable sharing of costs across all geographic regions and emitting industries.

Access to least-cost financing for mitigation efforts by emitting industries.

Acceleration of the most critical technological research and development.

Recognition of and support for energy efficient and demand side management programs.

Periodic re-evaluation of greenhouse gas reduction strategies and their impact on American consumers, businesses and our nation’s ability to compete internationally.

“Due to Congress’ inability to establish and pass legislation, the EPA is now moving to implement regulations of both mobile (cars, trucks, etc.) and stationary sources (power plants, factories, etc.) of greenhouse gases,” Wynn noted. “This proposed action by EPA presents a number of problems for electric cooperatives.  EPA focuses only on environmental protection and does not have to consider the effect new regulations will have on the economy, jobs and electric power rates.  The Clean Air Act was never designed to regulate power plant emissions.  These new regulations will increase the costs of delivering electric power.”

Wynn said that Congress is in a better position to develop a “big picture” and balanced solution to greenhouse gas regulation, taking into account the costs of these regulations on electricity consumers. He added that the Senate may consider legislation this fall to delay EPA’s regulation of carbon for power and manufacturing plants.

In the meantime, REC has launched the “Together We Save” initiative, an effort to inspire consumers to easily save energy and money. Most of those savings can be accomplished with little or no investment on the consumer’s end.

Wynn encouraged REC members to visit the company’s website (www.roanokeelectric.com), click on the GOING GREEN tab and select Together We Save. Those without internet access can contact REC at 252-209-2236 or toll-free at 1-800-433-2236 to learn about the program.

For REC members who may not qualify for the USDA loan and grant programs, there is the Electel Cooperative Federal Credit Union, which offers financing for home improvements. REC members are eligible to join and take advantage of many traditional banking services and loan products, including Energy Smart Loans, which can be used to finance heat pumps, window replacements, water heaters and appliances purchases.

“In my nearly 30-year career, I have never seen times as volatile as they are now,” Wynn closed. “However, tough times are already proving to bring out the best in us. We can work smarter to save dollars in our monthly budgets to ward off higher cost electricity. Please take advantage of the programs we are putting in place to help us go through these times of rising energy costs.”

Saturday’s annual meeting featured numerous vendors, promoting their goods and services, inside the HCHS gym. Games were set-up outside for children while a free barbecue and chicken lunch was served in the cafeteria.