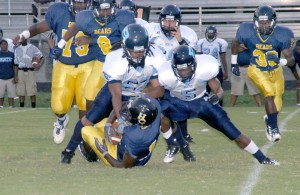 In a game that seemed destined to go into overtime, Hertford County feasted on a pair of late Bertie turnovers over the final 80 seconds, turning a 12-12 stalemate into a 25-12 win by the Bears here last night (Friday).

The meeting on the gridiron was the first of two this season between the two longtime rivals. Last night’s affair was a non-conference match-up….the real deal comes Nov. 5 in Windsor when the two meet in a Northeastern Coastal Conference match-up.

Last night’s affair had the look and feel of a typical Bertie-Hertford County game, just minus the traditional on-field fireworks….at least until the game’s waning moments.

After Bertie’s defense rose to the challenge and stopped a late Bears drive at their own 35 yardline, the Falcons fumbled on the game’s next snap, with senior defensive back Petey Boone recovering at the 35.

After two runs and a pass only netted the Bears five yards, HCHS faced a 4th-and-5 from the 30. From there, Boone, now at quarterback, completed a clutch 16-yard pass to Devin Vaughan, giving HCHS a fresh set of downs at the Bertie 14.

Two plays later, Boone called his own number and showed a few slick moves in the open field, dancing and darting 14 yards to paydirt for what proved to be the game-winning touchdown with 15 seconds left. Brandon Warren added the PAT for a 19-12 advantage.

Bertie completed one pass to their own 22 on the ensuing possession, but the Falcons’ next aerial was picked off by Stafone Dickerson, who returned the theft 30 yards to the endzone on the game’s final play to account for the 25-12 margin.

Bertie started the game like they ended it, fumbling away their opening snap of the contest with D’Issac Jordan recovering at the Falcons 31 yardline. However, the Bears failed to capitalize on that turnover.

Following an exchange of punts, HCHS got their offense rolling and produced the game’s first score. Taking over at their own 37, the Bears drove 63 yards in seven plays capped by Aaron Thomas’ two-yard TD run. A low snap on the PAT resulted in a Bertie block, leaving the Bears with a 6-0 lead at the 2:32 mark of the first quarter.

The scoreboard remained locked on that number until the final two minutes of the first half. The Bears got the ball deep in Bertie territory after a bad snap on a Falcons punt and set HCHS up at the visitor’s 36 yardline. From there it took only two plays for HCHS to strike as Justin Watson streaked past the Bertie secondary and Boone found his man with a 45-yard touchdown pass. The conversion pass failed, but the Bears had a 12-0 halftime lead.

After being bogged down for most of the first half, Bertie’s offense came to life over the final two periods. Switching from their traditional “Power I” formation to a “Double Wing”, the Falcons began to move the football with authority. However, it was a key HCHS turnover that set Bertie’s offense into motion and gave the visitors, led by former Bears coach Greg Watford, some much-needed momentum.

Hertford County fumbled away the kick-off to open the second half with Bertie’s LaVonton Cofield recovering at the Bears 23 yardline. Six plays later, Corbin Rascoe erased the goose-egg off Bertie’s side of the scoreboard with his three-yard TD run. The conversion pass failed, but Bertie had sliced their deficit in-half at 12-6 with 8:11 left in the third period.

Perhaps one of the best drives of the game came at the start of the fourth quarter when the Falcons went to work from their own 28 yardline after a HCHS punt. Twelve consecutive rushing plays covered 72 yards with quarterback Malcolm Cherry covering the final one yard with 5:24 left in game. However, the PAT kick fell short, leaving the two rivals deadlocked at 12-12. Desmon Askew was the workhorse on that game-tying drive, rushing five times for 34 yards.

Even though the final score wasn’t in their favor, Bertie won the statistical game as the Falcons finished with 201 total yards compared to 166 for the Bears.

Askew was the game’s leading rusher with 11 carries for 74 yards.

Bertie (0-2) travel to New Bern next week in another non-league outing.

Chelsea Davis Jernigan “reflects” on her future as the owner of Progressions Dance Center in Roanoke Rapids. Photo by Thadd... read more