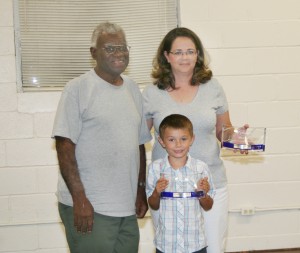 Seven-year-old Mike Harrington Jr. is shown with his mother, Wendy, and Columbus Pike, the man whose life was saved by the Harringtons. The mother and son were honored Thursday night with the Lifesaving Award as presented by Woodman of the World Lodge #328. Photo by Amanda VanDerBroek

On Thursday, Woodmen of the World Lodge 328 honored five individuals for their thoughtful endeavors and actions they have done for others.

Among those honored was seven-year-old Michael “Mike” Harrington Jr. of Woodland and his mother, Wendy, who are credited for saving the life of their neighbor, Columbus Pike, who was also in attendance.

“This is the time of year we present awards to those that are outstanding in the community,” said WOW President Jacques Turner to those who gathered in the old Ahoskie High School Band Room. “All of them are special in their own way.”

“When Woodmen thinks of the awards we are giving out we try to find special things, we know some of the ones because we see them,” she said.

Hollowell began with what she said is considered one of the most prestigious awards given by Woodmen of the World, announcing William Leary Sr. as the recipient of the Fraternal Spirit award.

Leary has held numerous roles with the Lodge, including serving as secretary from 1984 to 2009 and youth lodge treasurer. He also held many offices while serving in the Roanoke Chowan District of Woodmen of the World and as delegate to the jurisdiction convention as well as on committees there.

“He’s active in the Lodge projects, fraternal activities, flag presentations, nursing homes,” she said. “Those are a lot of things, for those of you that aren’t familiar, that Woodmen does.”

The next award bestowed was the Caring for Others Award which was presented to Rev. Robert May of Hickory Free Will Baptist Church in Ahoskie.

“It’s an award that most everyone in this building could qualify for, but there’s one person that has been doing it for years and years,” said Hollowell before she honored May with the award.

Hollowell said she knew May had been caring for others since 1973 because she saw him at the hospital all of the time.

The Environmental Award was presented to Douglas E. Perry Jr. of Ahoskie.

Hollowell said the award is given to a farmer that is doing things to help the environment.

“This is given to a farmer that farms how he is supposed to; he conserves the land, uses drainage ditches properly and keeps them cleaned out,” she said. “He helps save the environment.”

A few months ago, Columbus Pike, a resident of Woodland Olney Apartments who has a heart condition, collapsed in the yard between the apartment complex and the Harrington’s residence. Mike alerted his mother who called 911. Mike and Wendy stayed with Pike until medical help arrived.

“That was very courageous and you have either been watching a lot of TV or you have been taught very well,” said Hollowell to Mike. “You’ve been raised right.”

In an interview after the award presentation, Pike said he was happy Mike received recognition. He noted his children recently presented the youngster with a certificate of recognition to thank him.

“It was very nice,” said Pike about the seven-year-old’s actions. “My children think the world of him…I just thank him for it.”