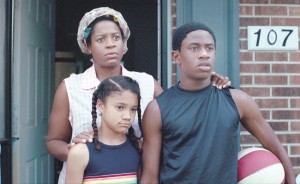 Three of the characters in the movie “Mississippi Damned” are shown here at an Ahoskie apartment complex during the film’s production. The movie makes its Ahoskie debut during two free screenings (10:30 a.m. and 2 p.m.) on Saturday, August 28 at the Gallery Theatre.

AHOSKIE – The critically acclaimed film “Mississippi Damned” may have a title bearing the name of one particular state, but its authentic content could fit within most any rural area.

The yet-to-be officially released movie will make its local debut on Saturday, Aug. 28 during two free screenings at Ahoskie’s historic Gallery Theater, located at 115 West Main Street. Show times are 10:30 a.m. and 2 p.m. Seating will be based on first arrival; being on time is of utmost importance.

This marks the first trip back to Hertford County since the movie’s production team, cast and crew were in Ahoskie two years ago. All but one scene was shot in Hertford County.

“We shot at the hospital, high school, Southern Bank, Ace Hardware, Catherine’s, Godwin’s Country Meats, Phillipi Baptist Church, the housing projects and private homes in and near Ahoskie,” said the movie’s producer and editor Morgan Stiff. “We chose Hertford County because that is where my family is from. My father and producing partner, Lee. V. Stiff, is from Murfreesboro and my mother, Renee Flood Stiff, was from Cofield.”

Students from Hertford County High School appear in several scenes, including members of the basketball team.

The film also has another local connection in Como native Caroline Stephenson. She serves as the film’s production supervisor. Stephenson will also unveil her 15-documentary – “Lost Colony” – prior to each Saturday screening of “Mississippi Damned.”

“We met Caroline in Los Angeles to find out she had roots in Hertford County as well,” Morgan Stiff said.

Lee and Morgan Stiff along with Stephenson will conduct a Q&A session following each screening.

“Mississippi Damned” takes place in 1986 and 1998 and is based on a true story about three poor, Black kids in rural Mississippi who reap the consequences of their family’s cycle of abuse, addiction and violence. They independently struggle to escape their circumstances and must decide whether to confront what’s plagued their family for generations or succumb to the same crippling fate….forever damned in Mississippi.

Along the way, “Mississippi Damned” is receiving acclaim for its gritty look inside the Black culture of the rural South.

Film critic Duane Byrge of The Hollywood Reporter raved, “Mississippi Damned is an unsparing insight into self-destructive patterns and malaise: alcoholism, welfare dependency, teen pregnancy, unemployment and spousal abuse all roil in this powerful entrant. Plaudits to filmmaker Tina Mabry for her tightly wound and powerfully explosive story. With no sugarcoating or soap-boxing, filmmaker Mabry has distilled a wide-ranging snapshot of the hardships and turmoil that do not come to life in dry sociology papers or political oratory about black poverty in the U.S.”

Ronnie Scheib of Variety Magazine wrote in his review of the film, “For the black men, women and children in Mississippi Damned, Tina Mabry’s autobiographical saga of intertwined destinies, that southern state epitomizes a domestic hell of borderline poverty and endemic abuse. Complex family trees sometimes make for tough narrative sledding, but the thicket of obligations, traumas and betrayals that entrap the “damned” here are well worth any momentary confusion. Mabry brilliantly captures a community as organic as it is dead-end, and the tortured legacy behind simplistic notions of ever escaping it. The NewFest audience award-winner demands strong critical support to overcome its downbeat subject matter and lack of a star draw.”