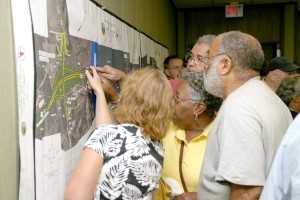 Residents of Gates and Hertford counties study one of the maps of a planned highway improvement project for US 13/158 between Winton and Tar Heel Barbecue.

WINTON – A planned 7.1-mile widening of US 13/158 between Winton and Tar Heel Barbecue in Gates County was met with opposition here last week.

North Carolina Department of Transportation officials conducted a scheduled public hearing on the project on Aug. 19 in the Hertford County Board of Commissioners’ meeting room in Winton. There, many individuals, part of a standing room only crowd, voiced their concerns and displeasure about the project, one scheduled to get underway next year.

DOT plans to spend $56,809,600 of NC Highway Trust Fund money on this “design-build” project. The plans call for widening the road to four lanes, including the addition of another two-lane bridge over the Chowan River, west of the existing span.

“With the design-build project we are trying as much as we can to reduce and minimize as many impacts as we can,” said public hearing moderator Kimberly D. Hinton of DOT’s Human Environment Unit, based in Raleigh.

“We really need your comments. Because this project is in the design stages, there is some flexibility in the design.”

Wesley Liverman, a Winton Town Commissioner, was the first to voice his concerns.

“Somebody from the great state of North Carolina needs to explain to me why they’re prepared to spend 58 million dollars on this project and we’ve got Jockey’s Ridge (a pile of dirt at the NC 11 & 11 intersection) clogging one of our main arteries because the state of North Carolina is not confident enough to come up with a solution to stop death at that intersection,” Liverman said to a rousing applause from the audience.

“You’ve got controlled access along this project. What about those who want to sell properties along this route. Will they have access,” asked Vernon Pope.

“I understand that we have to move traffic along, move trucks, move goods and products, but I don’t think you will find many people in favor of this,” Pope added. “Do you know that you will have to fill in three miles of swamp in Gates County? You can go a half-mile down the river and lessen the swamp land you have to cover. Why do you have to follow the existing right-of-way. Have you looked at other alternatives? You can do it without affecting these homes and businesses. We need to do this without affecting people.”

John Askew, who owns property on west side of the project, voiced his concerns.

“When you are talking about ingress and egress of this project, some of us are understanding that we’ll have to go a half-mile before we can get on this road,” he noted. “Some of us are understanding that we may have to go to the next major intersection to get on the road. From what I’m seeing we’ll have a (directional) crossover at Barfield Road, the next one will be at Corner High, the next one at Hill Lane Road and the last one at the end of the project at Tar Heel Barbecue.”

Hinton noted that directional crossovers will be located at most existing intersections as well as points in-between.

“You won’t have to go a mile to access one of these crossovers,” she promised.

Roger Kiker, who lives at Corner High, spoke on behalf of emergency responders, particularly fire and rescue personnel. Kiker is a member of the Eure Volunteer Fire Department.

“If I’m looking at this right, you cannot go straight across at NC 137 and the Sand Banks Road or at Corner High at Tinkham Road,” he observed. “So you’ve added to the response time for emergency responders.”

Paige Hedgepeth, owner of Tar Heel Barbecue, raised an issue about the amount of traffic currently using this stretch of US 13/158.

“You said earlier that some studies of this road began back in the 1990’s,” Hedgepeth stated. “I’ll say that traffic on this road was much higher back then than it is now. I say there’s no need to four-lane a highway that stops at a two-lane road.”

Cheryl Grimes owns G&L Variety at Corner High and a house right across the road, both that will be taken in this project.

“I’m not from this area originally, ya’ll are my adopted”….her voice overcome with emotion and unable to finish.

Arlene Gaither of Camden County, but has family who owns property in Gates County, questioned if the limitations of one driveway per parcel would impact the development of commercial property along the planned four-lane corridor.

“I feel this will handicap those who wanted to list and sell their property for commercial or business reasons,” she stated.

“Have you considered any other ways going out of Winton (with this road) other than at the stoplight,” inquired Karen Rowe of Winton. “Have you considered going out in the other direction, possibly rerouting the Nucor trucks that now come through downtown Winton. (On the west side of the 158/13 intersection) this project will affect the Commercial Ready Mix office and our county’s rescue squad building.”

Chuck Cedar, who lives along US 13 in Gates County and will lose his home to the project, raised questions about how DOT will help those who need to relocate.

“It’s my understanding that you will find people houses comparable to what they have,” he said. “There are not a lot of houses for sale locally. How far out are you going to look for a comparable house? Things like that need to be addressed.

“My house, for what I purchased it for, may be only worth so much, but a comparable home may be worth much more. It bothers me…I’m on a budget, I can’t go out and buy a $200,000 house and fit it in my budget. Is the state going to find me a house that’s in my price range? If not then you are putting me in a hardship.

“I moved to Eure because I like it here and it fit my budget, but it feels that I’m being pushed out,” Cedar closed. “This is where I planned to retire and now that’s taken away from me. I wasn’t planning on rebuilding my life at 40-something years old.”

“You’ve got seven to eight houses that will be directly affected; my question is what about those where the right-of-way goes six feet from your front door,” asked Daryl Taylor who also lives along US 13/158. “Once it gets that close, nobody wants your property, plus I don’t want to live that close to a highway. There are a lot of houses on 158/13 that fit that category.”

Another resident along US 13 South, Edna Darden Boone, said she worked too hard over the years to be able to afford a place to live, and now lose it to highway expansion.

“This right-of-way comes right through my den and I don’t have anywhere to go,” Boone said. “I don’t know what I’ll do. I don’t want to move from my home. I worked too hard for my house. I think I sit right up in it.”

Billy Felton said 99 percent of the proposed project was in Gates County.

“I’d like to see the statistics on why this project is needed,” Felton said. “The (traffic) congestion just isn’t there. I’m the assistant fire chief in Eure and I’m concerned with travel time. How much time are you going to save in travel on a seven-mile strip? From a safety standpoint, making u-turns in a highway is not a safe movement.”

Felton added, “If Tar Heel Restaurant catches fire, from what I’m seeing (on the maps) we’ll have to go about a mile down the road (to access a crossover and come back). I guess when we first go by them, we’ll wave and holler that we’ll be back in a little while. Who says this is necessary? What congressman decided this was to be his pet project? Who is he trying to impress?”

T.C. Vaughan said he was concerned about the truck traffic.

“My concern is trucks coming out on NC 137 having to go back up the road before they can make a u-turn to go back in the other direction. Is this considered safe,” Vaughan asked.

In its project handout, DOT said the purpose of the proposed project was to reduce traffic congestion and improve travel time. It was also noted in the handout that this proposal was part of the Strategic Highway Corridor, which includes improvements to US 158 from Winston-Salem to Kitty Hawk as well as upgrades to US 13 from Wilmington to Norfolk.

All comments were recorded and will become a part of a transcript that will be studied by the project team.