Thankfully, the cupboard is not completely bare.

Senior quarterback Petey Boone had his hand in all three HCHS scores – rushing for two and throwing for another – while fellow 12th grader Brandon Warren was true with all three of his extra points as the Bears rode that one-two punch to escape with a hard-fought 21-20 win over Gates County here last night (Friday) in the season opener for both teams. 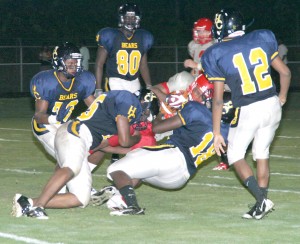 Gates County’s DaShawn Stokely is brought down by Hertford County’s Petey Boone (#5) and D’Isaac Jordan (#18) during last night’s 21-20 victory by the Bears in Ahoskie. Photo by Cal Bryant

It was Warren’s right foot that provided the win after the Bears trailed 20-14 in the third quarter.

The Bears game-winning drive started late in the third period just after the Red Barons had scored to grab the lead.

Starting from their own 35, the Bears drove 65 yards in nine plays, overcoming a holding penalty along the way. Neill Outlaw had two key runs in that drive, totaling 22 yards while Boone added a 20-yard rush. But the key play came when the Gates defense jumped offsides on a 4th-and-3 play from the 13. That gave the Bears a crucial first down and HCHS scored two plays later on Boone’s one-yard dive to paydirt. Warren added what proved to be the game-winning PAT with 21 seconds left in the period.

The fourth quarter turned into a punting battle for field position. That edge finally tilted the Bears way when Warren’s booming 52-yard punt pinned the ‘Barons at their own 3 yardline. HCHS defender Dorrien Askew intercepted a pass on the game’s next-to-last play to seal the win.

The Bears scored first, gaining excellent field position at the GCHS 24 after a short ‘Barons’ punt. Two plays later, Boone scrambled into the endzone from 11 yards out and Warren tacked on the PAT for a 7-0 lead at the 4:21 mark of the first quarter.

Gates County answered with a beautifully executed 90-yard, 14-play drive capped by Brandall Riddick’s 4-yard run. The PAT kick sailed wide, leaving HCHS with a 7-6 lead with 8:41 left in the 2nd period. DaShawn Stokley led Gates on that drive, rushing 10 times for 73 yards. He was the game’s leading rusher with 138 yards on 32 attempts.

The ‘Barons then turned to their defense to take their first lead on the night. On the game’s ensuing possession, Jeremy Smith picked off a pass that set Gates up at the HCHS 24 yardline. From there, the ‘Barons scored four plays later on Stokley’s 4-yard run. The conversion run failed, but Gates led 12-7 with 5:36 left before halftime.

Gates reclaimed the lead on their second series of the second half. Set-up by a fumble recovery by Avante Cross’ fumble recovery at midfield, the Red Barons drove 50 yards in 11 plays, capped by quarterback Graham Hobbs’ 1-yard sneak into the endzone. Stokley ran in the conversion, staking the ‘Barons to a 20-14 lead with 3:33 left in the third quarter.

HCHS (1-0) will welcome Bertie (0-1) to Bear Stadium next Friday in the first of two regular season meetings between the two long-time rivals.

Gates County (0-1) will host Pasquotank (1-0) next week in the home opener for the Red Barons.

Be a good sport

The season has officially arrived. As Roanoke-Chowan area students bid farewell to their summer vacation and return to class, that... read more