COMO – Chief Jason Howell of the Como Volunteer Fire Department (CVFD) has been named as the Fire Chief of the Year by the Eastern North Carolina Firefighters Association.

At age 16, Howell started his career in the fire service in 1991 as a Junior Firefighter with Como Volunteer Fire Department. He has served on the department ever since, advancing in rank on his way to being named as Chief in 2004. 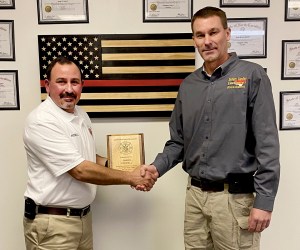 “Chief Howell has been the glue that has held CVFD together over the years, especially in this time of declining volunteerism,” stated Como Mayor Irvin Stephens in nominating Howell for the honor.

Stephens added that during Howell’s tenure as Chief, he has directed and led many improvements to the fire department building, including procuring funds to replace the roof and heating/air conditioning system; new storage building for excess equipment and training props; new industrial refrigerator, new refrigerated storage for BBQ fundraiser supplies and installation of gravel to a training area behind the station. Howell also led the specification and procurement of a new first due engine, new tanker, new brush truck with skid unit, and most recently a USDA grant to procure a dedicated rescue unit.

“He has also overseen an aggressive training program that has led to Firefighter 1 and 2 certifications for 14 of 21 current members,” Stephens said. “Through use of state grants and monies raised he has been able to provide new complete sets of turnout gear to all active members of the department as well as upgrade much of the departments tools and equipment which will help us with our upcoming NCDOI OSFM ratings inspections.”

Howell is also active in the Como community. He is a lifelong member of Buckhorn Baptist Church and long-time member of the Como Ruritan Club. He is also the Past President of the Hertford County Firefighters Association.

“His contributions to this community are too numerous to list as he has helped so many both personally and professionally. Members of community know they can count on him to be of assistance anytime it is needed,” Stephens stated.

“Chief Howell is of excellent character and is a very widely known and respected member of our community,” Stephens added. “He exhibits all of the characteristics that fire and emergency services personnel should embody and continually strives to make improvements to our department, and to keep the unparalleled support of our community that we have enjoyed during his tenure as Chief.”

The Como Volunteer Fire Department was founded in 1967. It serves its fire district as well as having mutual aid agreements in place with four adjacent departments in Southampton County, VA as well as automatic mutual aid for other Hertford County fire departments.