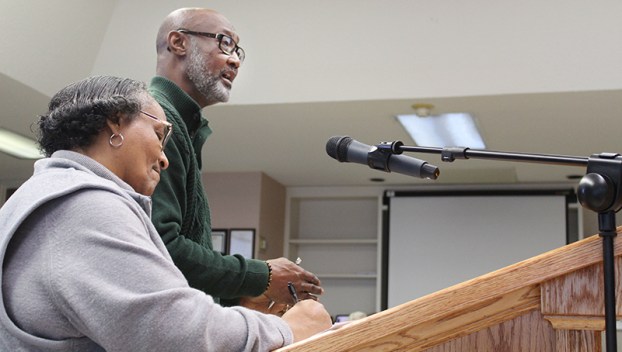 JACKSON – Northampton County held its first “public safety listening session” here on Dec. 20 to address concerns about crime within the county. Local law enforcement, town officials, and concerned citizens gathered with the Board of Commissioners to begin developing a plan of action to improve public safety.

The meeting came about after concerns were raised by a citizen during a county commissioners’ meeting in early December. The citizen, who had a family member victimized during a recent armed robbery at the Rich Square Family Dollar, said law enforcement response was inadequate and more needed to be done to control crime. She urged the commissioners to look into every option available to reducing criminal activity.

At that meeting, Board Chair Charles Tyner said, “I promise you we’ll look into this and something will be done. Safety and welfare of our citizens is number one.”

Tyner reiterated those thoughts at Friday’s “listening session” by explaining, “we cannot just walk around with our eyes closed and not hear what our citizens are saying about crime.”

Rich Square Mayor Reginald White and Seaboard Mayor Geraldine Langford were both in attendance to discuss issues within their own towns.

White requested the commissioners send a letter to the dollar stores in town addressing security concerns, such as lack of lighting and cameras, and urging them to work together to fix them in the wake of recent robberies.

In the ensuing discussion, Commissioner Geneva Faulkner suggested the town start requiring business permits that would stipulate more security measures. She and the rest of the board agreed that the county should also develop the same kind of thing for businesses located outside town limits.

“Speeding is an issue during the day,” said Mayor Langford during her turn at the podium to discuss Seaboard concerns, explaining that log trucks are often the most concerning speedsters through the town.

“We’ve got to emphasize community involvement, and being observant,” he explained.

Faulkner agreed with that idea, saying, “we have to take back our community by having those tough and crucial conversations sometimes in our own homes. There is a lot we need to do as a community to help our community become safer.”

Similarly, Northampton County Sheriff Jack Smith also emphasized community involvement in his remarks. He explained that his office is planning to start holding meetings in a different town each month to create better conversations with the community.

Tony Burnette, a Lieutenant in the Jackson Police Department, made a few comments from his law enforcement perspective. He mentioned their goal is to be “visible and proactive” in order to deter crime. He also suggested more of an emphasis on using CCTV, especially in problematic areas.

Sheriff Smith agreed that more functioning cameras would be helpful.

“I have already been working extremely closely with the towns,” the sheriff said as he gave a more in-depth look at countywide law enforcement coverage.

In regards to business robberies, he said they try to be at businesses when they close in an effort to reduce the crime, but “the only problem is we have more businesses than we do deputies.”

Additionally, he said deputies are often tied up with other duties such as responding to domestic disputes or escorting prisoners from the jail when they need to be moved.

“We are mandated by state and federal law to take care of our prisoners we have in this jail,” Smith said.

“We are doing all we can do to make it safe, but I would be remiss if I didn’t also add that we can’t stop it all,” he continued. “But we can do the very best that we can. We are going to work together as a family, as a team.”

At the end of the hour-long discussion, the commissioners and County Manager shared their own ideas about what needs to be done.

“There is no respect at all for the law,” said Commissioner Joyce Buffaloe. “We have to work together. We have to do all we can.”

County Manager Charles Jackson spoke about his recent experience doing a ride-along with the Sheriff’s Office, noting that they responded to six calls in the first hour alone. He said going forward they would focus on improving security at businesses and working to reduce loitering.

He also emphasized that it wasn’t acceptable for citizens, especially the elderly, to be afraid in their own homes.

“What good is it to have money in the bank and your people living in fear,” remarked Faulkner. “We’re living in a time I don’t like, but we can change it. But it’s going to take a lot of effort from everybody to make it happen.”

Tyner said they planned to hold a follow-up meeting at a later date.

WOODLAND – What started as an attempt to stop a vehicle for a traffic violation turned into a two-county chase... read more