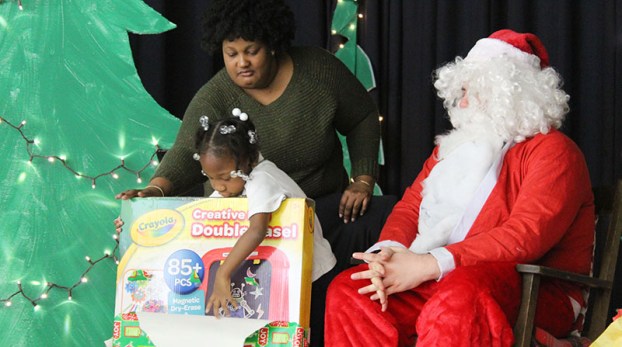 A student at Riverview Elementary School unwraps a gift as presented by Santa, via an outreach program sponsored by the Murfreesboro Police Department. Staff Photo by Holly Taylor

MURFREESBORO – Murfreesboro Police were at Riverview Elementary School on Thursday, Dec. 19, but not for any typical law enforcement duties. Instead, they were watching students of Riverview’s three Exceptional Children classes open Christmas gifts.

The gifts are the culmination of a community outreach program the police department sponsors each year. MPD Captain James Dilday came up with the idea several years ago when teaching D.A.R.E. classes out at the elementary school. He said his “heart went out to those students,” and so he coordinated with one of their teachers to get Christmas presents for the students in the EC classes.

The police department began raising money for the gifts, opening a Christmas fund which collects donations from several local businesses who want to help out each year.

The program took a break for a few years after the original teacher retired, but restarted again in 2017 and has been going strong ever since to bring some extra Christmas cheer to the students who range from three-years-old to fifth grade.

“This year we have 17 students,” Dilday said. “We’ve got more students now than we’ve ever had.”

On Thursday, those students eagerly gathered around Santa Claus and waited patiently for their turn to open their gift. Excitement buzzed through the air as they tore through colorful giftwrap to see the present underneath, ranging from Hot Wheels cars and Barbie dolls to art easels and learning games.

Dilday said they always let the teachers pick out the gifts themselves to make sure the children get exactly what they want.

Not only were the kids excited for their own gifts, but they happily clapped and cheered for each unwrapping. Several offered to share their toys with each other, and there were happy hugs all around.

One child joyfully exclaimed her gift was “exactly what I wanted” as she raised it high above her head to show everyone.

“It’s the most wonderful time of the year,” said Riverview EC teacher Breana Wynn, who expressed her thanks for the police department’s giving spirit.

In turn, Dilday expressed his thanks for the donors who contributed to make the program possible. Businesses and individuals are able to donate to the fund all year long.

“Our community really wants to help,” he explained. “We had more personal donations this year than normal.”

“It’s such a great cause,” Griffith acknowledged. “We’re really thankful for the donors we have had in the past, and we just like to encourage people to continue to donate.”

“It’s local,” he also noted. “When you can touch lives that are right here, that’s pretty awesome.”

RALEIGH – Catherine Parker said she was stunned upon learning she had been named as North Carolina’s 2019 Rural Leader... read more