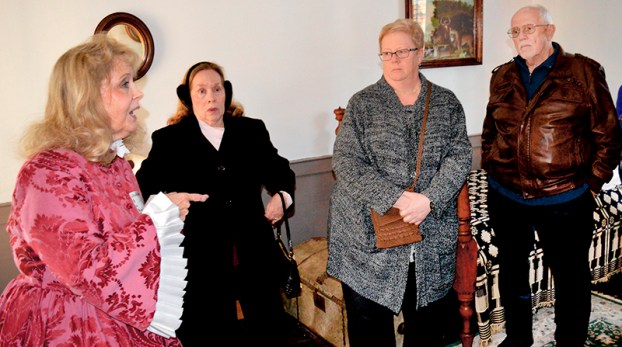 Almost 200 guests took this year’s magical journey, which began at the Dr. Walter Reed House. Suzanne and Doug Deets and volunteers welcomed guests. They pointed out and told about the newest acquisitions to date. Suzanne pointed out a bed coverlet, an animal skin covered trunk, a candle stand, a painting, Victorian glass and several porcelain pieces that were added. The tour included the upstairs bedrooms. This seven-year restoration project and furnishing with period furniture was lovingly overseen by the Deets. The museum honors Dr. Reed and his accomplishments in life.

Sprinkled throughout the tour at various sites were delicious treats for guests to partake. One such site was the Roberts Vaughan House. Visitors there were refreshed with punch, cakes and condiments from a festively attired table. A guitarist set the mood as visitors listened to volunteers explain and showcase the house and history of the owners.

The Murfree-Smith Law Office’s volunteer spoke of Mrs. Margaret Deloatch’s daughter donating a large collection of varied items of her mother’s. Her donations included china, glassware, porcelain, doll and other items. Some items were sold, and others were used throughout the historical district. Monies were used to benefit the society.

The Ag-Trans Museum houses an extensive collection of farming implements, buggies and other means of transportation used in the past. Volunteers talked and answered questions concerning its collection. Seafood bisque served there was prepared by John’s Seafood Restaurant in town. The servers informed everyone it was a special treat, which partakers heartily agreed.

Taking a short walk, people arrived at the Village Print Shop. Chowan University’s professors and students of the graphic design department manned the shop. They discussed the evolution of the printed word and encouraged interaction as they demonstrated various antique printing presses and explained the linotype process, some of which were still in use in the 1970’s.

The Jordon Building was a new addition to the tour. It housed vendors offering Jazzy children’s books by the author and farm raised pork products. Antiques and other items were on display to be sold for the society’s benefit. A sampling of different types of mouth-watering fudge was there to the delight of those wishing to try before making a purchase. Big hits were the lemon and banana pudding, which many had never heard of before.

Next on the agenda was the Rea Museum. Wealthy Boston born merchant and shipper William Rae built the structure in 1790. It is the oldest commercial building in North Carolina. The 20-inch-thick walls were built with locally made brick.

An authentically clad Confederate soldier re-enactor and other volunteers talked with visitors about diverse items housed in the museum. These included the Gatling Gun and other weapons and flags of yesteryear. People were encouraged to go upstairs to view more exhibits. Visitors were served warmed apple cider to combat the night’s nippy air.

Horse hoof beats were heard approaching as a carriage carrying guests of the tour came into view. A tram was also offered to make going from place to place easier and fun. Some people chose to walk most of the tour guided by the candles along the sidewalks.

Evans Tin Shop contained tools and materials used by Evans to hand make different tin made items. This labor-intensive method was used before automation and plastic molding made this type of work obsolete. Stovepipe, gutters, roofing, cups, plates, utensils and some lanterns were fashioned from tin by tinsmiths. Items in this shop are on loan by heirs of the Evans family.

Winborne Country Store held everything you might have needed back in the day, including everything from baking needs to sewing notions. You could even pick up and mail your letters while there; grab a snack and enjoy a friendly game of checkers. The proprietor and helpers were there to fill your every need. Volunteers dressed in period attire greeted everyone with a smile and selection of cookies.

Across the street was the Blacksmith Shop. An outdoor fire warmed everyone as volunteers demonstrated the blacksmith craft. Bagged whole peanuts were offered to guests. Inside, tour patrons were greeted with the smell of roasted peanuts and the sound of music of the Potecasi String Band. Folks were offered a sample of roasted and salted peanuts cooked in the forge.

Visitors were invited into the Wheeler House. They were shown antiques that furnished a parlor complete with an organ and wax flowers. Ahoskie’s St. Thomas Episcopal Church choir members sang Christmas carols accompanied by a guitarist.

A bedroom, dining room and kitchen were included in this home’s tour. Upon entering, the detached kitchen engulfed the visitor with welcomed heat and the smell of foods cooking in the hearth. Two young ladies sat at the table while the cook talked about the preparation of the meats, vegetables and fruits used in prepared dishes. The church’s guitarist played a period ballad.

Next up was the much-anticipated dinner served at the Murfree Center. The delicious meal consisted of slices of roasted pork and stuffing with optional gravy and collard greens seasoned with country ham. Sweet potato casserole, dinner rolls and sweet tea, water and wine were offered. A pianist entertained with Christmas music while guests got acquainted with one another while feasting on their candlelit meal.

The last stop was the Hertford Academy. Folks enjoyed their pick of a wide selection of scrumptious sliced cakes. Offered as well were water and hot coffee.

Mary Etta Flowers stated the tour was the brainchild of Dick and Edna Hammel and it has just evolved over the years.

“We have had as many as 1,300 come in two nights,” Flowers said. “In the past, Dick smoked turkey breasts and cooked country hams. They prepared all the food at the Murfree Center, which had a commercial stove at the time. They did it as long as they could. They were in their late 80’s. They retired and moved.”

Flowers said she had been volunteering for all 34 years of the event. She is the site manager for Hertford Academy. She looks after the house, keeping it clean and checking for needed repairs.

After a large storm she checks for leaks or damages to the building and property. Each site manager gets their own people to help. Some choose to buy meal tickets, but she chooses to cook and feed her crowd.