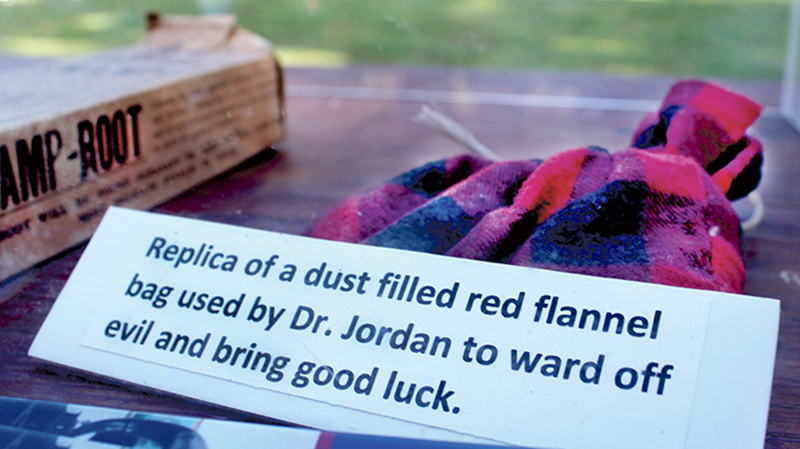 A display case set up outside Murfreesboro’s Rea Museum on Friday contained some of the artifacts and replicas of the items used by the famed “conjure doctor” Jim Jordan. Staff Photo by Holly Taylor

MURFREESBORO – Dr. Jim Jordan was known as a “conjure doctor” in Murfreesboro during his life, and now a new roadside “Legends and Lore” marker will honor his memory and share his story with a new generation.

A dedication ceremony, sponsored by the Murfreesboro Historical Association (MHA), was held here Friday morning near the Rea Museum on Williams Street. Several members of Jordan’s family attended along with the community and members of the historical association.

MHA President Lamar Van Brackle opened the ceremony with a welcome to the attendees, noting they were “recognizing and honoring one of the region’s best known and most influential personalities.”

Jordan was born in 1871 and worked for several decades until he passed in 1962. As a conjure doctor, he used items such as herbs, roots, and a crystal ball to treat patients who came to him for help, often from all over the country. A few of Jordan’s tools, including his own crystal ball, were on display at the dedication event courtesy of the Rea Museum. 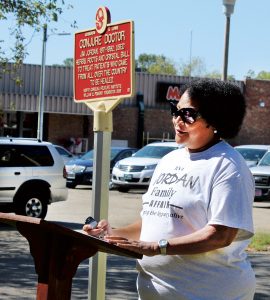 Mildred Jordan shares memories of her late grandfather, Dr. Jim Jordan, whose legacy is now set within the red marker shown in the background. Staff Photo by Holly Taylor

“He’s remembered primarily, of course, as a conjure doctor, but he was also a very successful businessman as well as one of Hertford County’s largest farmers in his day,” said Van Brackle. “He also ran a major logging operation, operated a country store, and he still had time to put together a local baseball team.”

Murfreesboro Town Council member Berna Stephens spoke about the impact Jordan had on the community, recalling that she used to pass by his house when she was young and see all the vehicles of people coming to see the doctor.

“They came from near and far to get his services. He meant so much to this area, but he touched so many lives,” Stephens continued. “I think that’s something for us as a community to recognize, to celebrate. I think it’s an honor to his family that we remember him and the contributions he made to this community.”

A few of Jordan’s descendants took the opportunity to speak during the event, all sharing memories of the doctor.

“I remember when I was a little girl growing up, I used to go down to the store and sit with him, and I used to wonder what he was doing. He had this little crystal ball he used to look at,” recalled granddaughter Mildred Jordan.

“My grandfather was a great man,” continued Bernice Jordan Barnes. “He helped any and everybody. I guess that rubbed off on me.”

“I’m blessed to share the name with my great grandfather. It’s an honor to have that name,” said James S. Jordan. “I’m so happy about the things my grandfather did.”

All acknowledged how the doctor helped feed or house people in need in addition to his medical conjuring work.

The new Legends and Lore marker was made possible through a grant from the William G. Pomeroy Foundation, which has helped erect about 900 markers in 12 different states to promote history and tourism.

Though a representative from the Foundation was unable to attend the event, Van Brackle read a letter they sent to commemorate the occasion.

“We know just how important it is to recognize cultural heritage in local communities,” Van Brackle read. “It is our hope that [the marker] will stand here as a testament to this unique part of your cultural heritage for generations to come.”