Two years ago at about the same time, all eyes were locked on a tropical system whose male name started with an M.

While the latest storm promises not to be as powerful or impactful as Matthew in 2016, Hurricane Michael is worth keeping an eye on.

Michael, a mere tropical disturbance over the weekend, blossomed into a hurricane on Monday, packing winds of 75 mph as it entered the southern Gulf of Mexico.

Forecasters at the National Weather Service (NWS) are predicting the storm will strengthen later today (Tuesday) into a Category 2 hurricane (with winds exceeding 100 mph) as it makes its way towards the Florida panhandle. From there the storm’s predicted track takes it across Georgia and into the Carolinas later in the week. 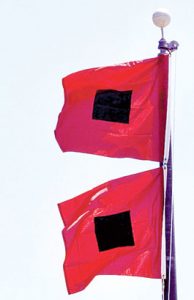 “We will being keeping an eye on the track and predictions closely,” stated Chris Smith, Hertford County’s Director of Emergency Management. “There has not been much information as to expectations at this point as it is still too far out.

“My advice right now is to stay tuned and be prepared,” Smith added.

While it’s expected that Michael will weaken as it tracks north, heavy rain and gusty winds could possibly be in the Roanoke-Chowan area’s forecast on Thursday into Friday. Like Smith, the National Weather Service says there remains a lot of uncertainty with this hurricane

“Michael, or the remnants thereof, will potentially track across the northeast North Carolina and southside Virginia  region Thursday or Friday. The primary threat at this time is heavy rain and minor flooding. However, locally stronger wind is possible along the coast. Please continue to monitor the latest forecast track from the National Hurricane Center,” the NWS said in a statement.

Leading up to Michael’s possible arrival, weather across the Roanoke-Chowan area calls for partly sunny skies and highs in the mid-80’s on Tuesday and Wednesday. Rain chances increase to 70 percent on Thursday as Michael inches closer.

After the storm passes, the NWS is calling for more fall-like weather locally. Friday night’s low is expected in the mid 50’s followed by sunny skies and a high of 71 degrees on Saturday.

WINTON – The Hertford County Board of Commissioners have adopted a Capital Project Ordinance as plans to build a new... read more