MURFREESBORO – Owen Black is back to life as an ordinary teenager, enjoying the final few weeks of his summer break as he prepares for the start of school as a rising eighth grader at Gates County’s Central Middle School.

However, up until this point, it’s been an extremely busy summer for the son of Rodney and Michelle Black of Murfreesboro. The family was the recent guests of Major League Baseball (MLB) due to Owen qualifying for the Junior Home Run Derby National Finals. That event, conducted in conjunction with MLB’s annual All-Star game, was held in Washington, DC on July 14-17. 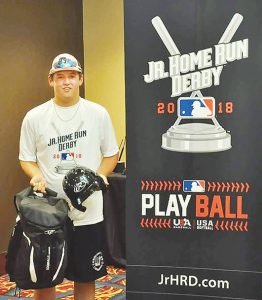 Owen Black is shown with a sampling of the gifts he received for being among the eight national finalists to compete in Major League Baseball’s Junior Home Run Derby.

“We had a blast,” said Rodney Black. “The experience was a thrill of a lifetime.”

Mr. Black added that his son and the other seven finalists bonded quickly.

“Once we all met for dinner that first night, the boys became buddies,” he noted. “On the day of the actual competition (Saturday, July 14) they were all pulling for each other. Owen and all the boys were thrilled just to have an opportunity to complete and we all congratulated the young man from Texas who won the Home Run Derby.”

Those competitors (there were three age groups: 8U, 12U and 14U) and their families enjoyed the proverbial red carpet treatment. In addition to all travel, hotels, and food, the participants and families received clothing, baseball gear, tickets to the MLB All Star events, and the privilege to compete on the actual Washington Nationals ball field.

“We found out during our welcome dinner that this year there were over 40,000 youth batters in local events that tried to make it to the Jr. MLB Home run finals. So just make it to the final eight in each age group was a great honor,” Rodney Black said.

By random draw, Owen was chosen to hit first in the 14U group. During warm ups prior to the actual competition he led the group by hitting seven homeruns on 10 pitches.

During the actual competition, Owen hit seven homers of 20 pitches he saw, earning a 4th place finish in this national event.

“Fourth place out of 40,000 in the United States is not too shabby,” Mr. Black stressed.

In addition to his 4th place finish in the Jr. MLB Home Run Derby, Owen also won the Sportsmanship Award for the 14U group. That earned the local younger a special award – a custom made wooden Louisville Slugger 2018 MLB All Star bat.

The Jr. MLB Home Run Derby staff picked Owen for this special award for his ability to be a good sport, his drive and focus, and for being a competitor in addition to being kind and supportive to the other participants, for being humble, and for his polite southern ways. 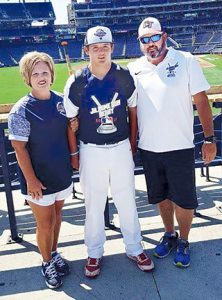 Owen stands with his parents, Michelle and Rodney Black of Murfreesboro, inside Nationals Stadium in Washington, D.C.

“We are so proud of Owen and his accomplishments both on and off the field,” Mr. Black added, speaking for himself and his wife. “Winning the Sportsmanship Award was just icing on the cake. As his parents, the sportsmanship award was much better than even winning the derby.”

July has been an amazing month for both Owen and his parents.

“We started the month with a once in a lifetime weeklong trip to Cooperstown Dream Park in New York where Owen and his Carolina Titans completed against 104 other baseball teams,” Mr. Black stated. “The Titans finished 26th and Owen finished third out of 104 other hitters in the Cooperstown Home Run Derby.

“A few days later we flew to Washington for the MLB All Star week festivities and Owen’s Jr. MLB Home Run Derby, which was also a once in a lifetime trip,” he added. “Then we came back to Murfreesboro, unpacked, and repacked for four days in Morehead City at the Crystal Coast Wood Bat World Series where the Carolina Titans earned the runner up title in the Gold Championship.

“We are truly blessed to have made all these memories together as a family and looking forward to what the future may hold. We all would like to thank everyone, both family and friends, for all the support,” he concluded.

CONWAY – A Conway man stands accused of robbing a residence in his own neighborhood. Steven Brooks, 21, of Garris... read more