Hutchinson named Legionnaire of the Year

AHOSKIE – James Hutchinson was presented the Department Legionnaire of the Year Award for 2018 by Department Commander Candidate Mark LeBlanc from Post 230, Spring Hope. He also presented the post a flag streamer and certificate for 100% membership for 2018.

Hutchinson’s resume is superior. He has led the post membership to 100 percent for two years in a row and has coordinated and supervised several work projects at the Parker Veterans Center. His first project was to make the ladies restroom handicap accessible and then he oversaw the enlargement and refinishing of the Auxiliary meeting room. He also planned and coordinated several fundraisers that helped the post maintain its financial stability. 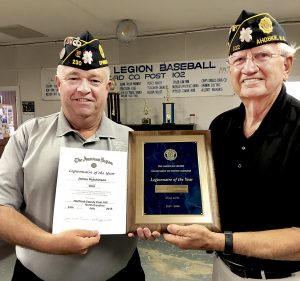 Hutchinson is also very active in the Habitat for Humanity program and devotes many hours of free labor and supervision to building homes for those who need assistance with home ownership. He is also involved with the Habitat Thrift Store in Murfreesboro.

He retired from part ownership of J&R Electrical several years ago and then he retired from Roanoke-Chowan Community College where he taught heating and air conditioning. He has also pastored several churches and retired from preaching for a few years until he was recently called to be Interim Pastor at Hamilton Church of Christ.

He was a key member in organizing and chartering the Vietnam Veterans of America Chapter 1094 in Ahoskie in 2014. He is now the treasurer for the VVA Chapter. He is a Vietnam era Marine Corps veteran who served as a Military Policeman.

Recently, Hutchinson led the effort to charter a Sons of the American Legion (SAL) at Post 102.

Hutchinson is a busy man who strives to help others and asked for very little in return, mostly cooperation. He is the first known member of Post 102 to awarded the North Carolina Department Legionnaire of the Year in the 100 year history of the post. The membership is honored to be represented by their commander across the great state of North Carolina.

Hurricane Season: Are you prepared?

Last week I had the opportunity to attend a community gathering in Rich Square—specifically in the Creecy community—to write a... read more