LAGRANGE – A night of springtime chill cooled the Hertford County High bats here on Tuesday, leading to the Bears being shutout 6-0 by second-seed North Lenoir in the first round of the 2A NC High School Athletic Association baseball playoffs.

The Bears, who made the post-season as a wild-card, were seeking their first state title, while the Hawks are after their first since winning it all back-to-back in 2005 and 2006.

In the top of the first inning, Hertford County wasted little time getting to Hawks right-hander Quinton Pittman as Evan Lassiter and Edward Bradley smacked singles to get two runners on base with one out.  But both were left stranded as Pittman got out of the jam. 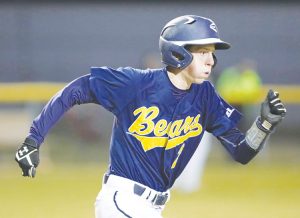 Hertford County’s Alden Lassiter sprints to first base on a base hit in an earlier game. Lassiter had a hit Tuesday night, but the Bears lost their 2A playoff game in LaGrange to North Lenoir 6-0, ending their season. | William Anthony Photography

He then retired the next 14 Bear batters in a row.

North Lenoir got its first run in the bottom of the second inning for a 1-0 lead after two complete innings.

The Hawks went on to tack on another run in the bottom of the third in what was still a tight contest, but left the home team holding a 2-0 advantage after three. In the bottom of the fourth an error by Hertford County led to two more North Lenoir runs and a 4-0 lead after four innings.

Another Bears miscue placed another run on the board for a 5-0 lead. In all, North Lenoir scored five runs on Hertford County errors.

In the top of the sixth, Tyrek Beverly and Alden Lassiter both singled, but again the Bears couldn’t move them and they remained scoreless after five-and-a-half innings.

In the bottom of the frame North Lenoir got its final run, mustering their way to a 6-0 lead.

Pittman gave way to Payton Howard to close out the game in the top of the seventh, and the Bears struck.  Trevor Lee and Trent Munford greeted the reliever with back-to-back singles, but again, they were left stranded as Hertford County watched its season come to an end.

The Bears had six hits, one each by Evan Lassiter, Alden Lassiter, Edward Bradley, Beverly, Lee, and Munford.

Evan Lassiter went five innings and took the loss, giving up five runs on five hits with four walks and three strikeouts. Munford pitched the sixth inning, surrendering a run on a pair of hits.

The Bears were only shutout four times all year, and all four times to playoff teams (Gates County, North Pitt, Bear Grass, and the Hawks). On the positive side, they repeated as champions of the Easter holiday Sgt. Will McLawhorn Memorial Tournament at Northeast Academy, and along the way won seven out of eight games.

Hertford County ends its season at 8-16.

Owen Black, the 13-year-old son of Rodney and Michelle Black of Murfreesboro, recently competed in and won the local 14U... read more