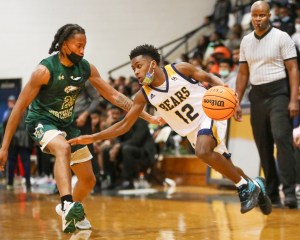 Hertford County’s Jeremiah Benthall (#12) drives past a Northeastern defender during Thursday night’s 60-35 win over the Eagles in the second round of the Class 2A state play-offs. Photo by William Anthony

Both HCHS varsity teams advanced to Saturday’s third round thanks to wins here Thursday night.

In Thursday’s varsity boys game, HCHS (seeded fifth) turned up the defensive pressure and routed conference nemesis Northeastern High School, 60-35. That win avenged a 73-68 loss by the Bears on their home court against the Eagles in last week’s conference tournament semifinals.

“We changed things up a bit since we last played them and really got after their guards on defense,” said veteran HCHS coach Charles Simmons.

After a slow start, HCHS led 20-11 at halftime and then built a big lead in the third quarter where the Bears outscored Northeastern, 26-11.

Freshman Rimiez Williams led HCHS, scoring a game-high 25 points on an 11-of-17 effort from the floor. Keveon Rodgers (12) and William Valentine (11) also scored in double figures. Rodgers added 14 rebounds as HCHS held a dominating edge on the boards (29-13). 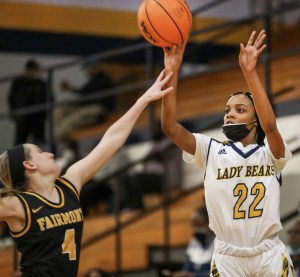 Tamia Britt (#22) is fouled by a Fairmont High School player as she launches a shot in Thursday night’s game. Britt and the Lady Bears advanced to the third round of the state playoffs with a 54-44 victory. Photo by William Anthony

In the boys game, HCHS knocked off #28 James Kenan, 79-44, led by 25 points from Israel Powell and 10 points each by Jeremiah Benthall and Valentine.