Lady Bears get (another) historic win

Bertie threatened in the first inning, but the Bears’ Emily Merritt pitched her way out, avoiding a threat.

Merritt got some insurance in the Bears’ half of the first when she reached on an error and D.L. Watford followed, and on a full-count blasted a two-run home run over the fence in left centerfield, scoring two runs. Mya Mabine followed with a single, stole second, went to third on a groundout, and scored the third run of the inning on Brionna Morings’ base hit into the gap in right centerfield. It was 3-0, Hertford County, after one complete inning of softball. 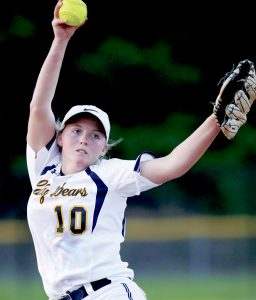 Emily Merritt’s Northeastern Coastal Conference win Tuesday over Bertie, 4-3, marked the Lady Bears’ first-ever victory over their rivals and left the two schools tied for second in the conference standings, both at 6-3. Photo by William Anthony

Hertford County got one of those runs back in the bottom of the third when Mabine walked, went to third on Karren New’s single, and scored on Emily Rhodes’ ground out. It was a two run lead for the Bears, 4-2.

Both teams ‘held serve’ with a stalemate for the next three full innings before the Falcons mounted a comeback. Rachel Hoggard got a one-out single to right, but was erased when Dawson hit a shallow pop-up fielded by Watford in centerfield, and she threw out Hoggard at second on the fielder’s choice. Byrum then bunted her way on and when the ball was thrown away for a two-base error, Dawson scored; Byrum reached third, and Bertie was within a run of tying the game at 4-3. Mizelle was walked to put runners on the corners, but a fly-out ended the threat and the game.

Merritt took the win for Hertford County. She lasted seven innings, allowing eight hits and three runs while striking out five and walking one.

The Bears had six hits in the game.  New and Morings had two hits each while Watford and Mabine had the other hits; Watford’s, the home run.

That tie in conference will be broken at Senior Night today (Thur.) at Bertie when the same two teams meet with a 4:30 p.m. start.

AHOSKIE – For the first time in 21 years, there is a new regular-season baseball champ in the Tarheel Independent... read more