Trailing 4-0 headed to the bottom of the fourth, Hertford County had a walk issued to Evan Lassiter and a single by Edward Bradley to get two runners aboard with no outs, but three straight strikeouts by Currituck’s Derek Whitehurst ended the threat. 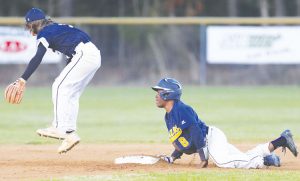 The Knights added five more runs in the top of the fifth to lead 9-0 before the Bears scored their only runs of the game. Parker Bradley singled to left field, Tyrek Beverly walked, and Alden Lassiter reached on a fielder’s choice with Bradley out at third. Beverly then scored on Evan Lassiter’s RBI single to left and Alden Lassiter scored on Edward Bradley’s RBI single to center. That made it 9-2 after five.

Hertford County had seven hits, two each by Evan Lassiter and Edward Bradley while Parker Bradley, Cameron Lassiter, and Trent Munford had one hit apiece.