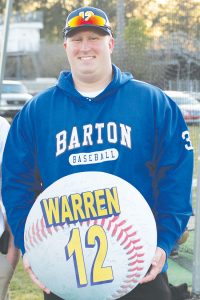 Former Hertford County player and three-time conference Player-of-the-Year Brandon Warren displays the special plaque honoring him on Brandon Warren Night on Friday against First Flight. However, Braxton Hughes (#10) and the Nighthawks spoiled the evening by claiming a 13-3 win over the Bears.

First Flight opened the scoring with a run in the top of the first inning and led 1-0 after one complete inning of baseball.

The game remained a pitcher’s duel between the Bears’ Trent Munford and the Nighthawks’ McCoy Davenport.

The ‘Hawks broke the stalemate with five runs in the top of the fourth inning for a 6-0 bulge before the Bears finally struck.

In the bottom of the frame, Edward Bradley doubled down the left field line and scored on Trevor Lee’s RBI single to trail 6-1. First Flight got that run back, and three more, in the top of the fifth to stretch it to a 10-1 advantage, then claimed its final three runs in the top of the sixth.

Hertford County got a final pair in the bottom of that same inning when Kole Liverman singled to centerfield and advanced to third on Evan Lassiter’s double. Both runners scored on Cameron Lassiter’s two-run double, but the threat ended when a runner was thrown out at third base on a wild pitch to end the game.

The Bears struck for five hits: one each by Lee, Liverman, Edward Bradley, Evan Lassiter, and Cameron Lassiter. Braxton Hughes had three of First Flight’s 15 hits and he drove in seven runs. 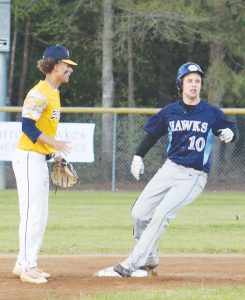 Hertford County falls to 7-10, 4-2 in conference, and visits Currituck in Barco tonight (Tuesday) at 7 p.m.