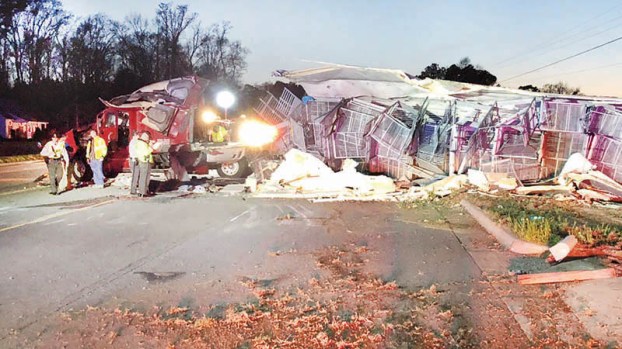 An overturned 18-wheeler blocked both lanes of US 17 for hours on Thursday night. The accident occurred less than one mile north of the US 17 / NC 45 intersection at Midway in Bertie County. | Photos by Jodey Sary

MERRY HILL – An overturned 18-wheeler blocked both lanes of US 17 near here Thursday night. Fortunately, there were no serious injuries reported.

According to information from Jodey Sary, Chief of the Midway-Merry Hill Volunteer Fire Department, a call was received at 7:15 p.m. regarding a vehicle accident on US 17 and Taylor’s Store Road near Quality Gas Service. The accident scene was less than one mile north of the US 17 / NC 45 intersection at Midway. 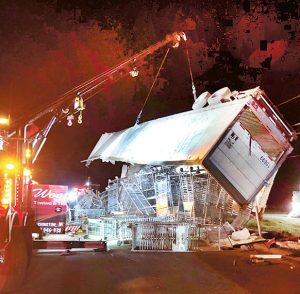 A heavy wrecker slowly lifts the trailer of the wrecked rig, leaving the plant/flower racks in place on the roadway.

Sary said upon the arrival of the fire department units, they saw an 18-wheel tractor-trailer overturned in the southbound lane of US 17, blocking traffic in both directions.

He added that the trailer, based out of Florida, contained metal racks used for transporting a large volume of plants and flowers.

“Fortunately, a Hispanic family stopped at the scene and were able to help translate,” Sary said. “Through the translator we learned that the driver said sunlight at sunset got in his eyes, temporarily blinding him. He swerved to the right off the road, then overcorrected, swerving back onto roadway, causing the vehicle to flip over on its side.”

A heavy wrecker was summoned to the accident scene to remove the overturned big rig.

Sary said members of his department left the scene shortly before midnight.

An accident report is pending from the Highway Patrol.

WINDSOR – The old idiom says ‘keep your nose to the grindstone, ear to the ground, and shoulder to the... read more