AULANDER & MERRY HILL – The gift of a warm coat for a young child in a war-torn nation still has meaning between two total strangers over 72 years later.

It was at the end of World War II when the now late Katie Rawls of Aulander heard a knock at her door. There, an individual representing the Evangelical Relief Society informed Mrs. Rawls of an effort to collect clothing and shoes for families still struggling overseas in the aftermath of the war.

“I was only 13 years-old at that time, so I don’t remember the exact items that my mother donated that day,” said Stanley Rawls, formerly of Aulander now living in Merry Hill.

What the young teen and his family did learn was that a coat once worn by Stanley found a new owner some 4,200 miles away across the Atlantic Ocean. And how was that connection made….especially in 1948, long before the advent of email, text messaging and Facebook? 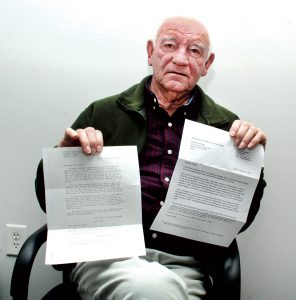 Stanley Rawls, formerly of Aulander now living in Merry Hill, holds copies of the two letters, one sent in 1948 and the other from earlier this year. Staff Photo by Cal Bryant

It seems that Stanley Rawls had a penchant for marking his items of clothing with his name and address.

“I had written my name and address inside that coat….I do remember that,” he said. “I had outgrown that coat; I guess that’s why my mother donated it.”

Sometime in the early stages of September 1948, a letter arrived, addressed to Stanley, at the Rawls home.

“I just recently came across that letter while going through some things of my late wife who died last year,” Rawls said. “I remember getting that letter because it was written in German. My mother got Mr. [Frank] Guttu to translate the letter. He held a position at the POW Camp in Ahoskie during World War II.”

The letter was written by Frau (Mrs.) Kaetha Engelhardt of Erbach, Germany.

“Through your kind donation we received a coat for our ten year old son,” Mrs. Engelhardt wrote. “We found your address in it and wish to take this opportunity of expressing our heartfelt thanks for your kindness. The coat pleased our son very much, it fits him very well and he proudly wears it.”

She went on to explain in the letter that her family had been unable to purchase clothing for several years.

“For this reason our clothes are badly worn, and then too the children have grown out of them. It is really hard to provide the children with proper clothing,” she wrote.

At the end of the letter, 10-year-old Wilfried Engelhardt added his personal thoughts, writing, “I want to close my mother’s letter by thanking you very much for the coat. It has pleased me very much, and will try to always keep it nice and clean.”

This “feel-good” story could have very well ended when the Rawls family read the translated letter in late September of 1948. However, 72 years later, a happenstance relationship between a member of the Rawls family and a German-speaking friend in Virginia Beach rekindled this story.

“Lee Rawls, who also lives in Virginia Beach, knew Hans Griebl,” Stanley Rawls explained. “Lee showed Hans, whose family is German, a copy of the letter sent back in 1948. Earlier this year, Mr. Griebl made a trip to Germany. While he was there, he checked to see if there were any members of the Engelhardt family still living in Erbach. Low and behold, he meets Wilfried Engelhardt, the little boy who got my coat back in 1948. He’s now 82-years-old.”

In return, Engelhardt sent Stanley Rawls a letter, dated Feb. 1 of this year.

“We are joined by an almost unbelievable care package initiative in 1948,” Engelhardt wrote. “I can’t remember the occurrence of receiving the coat myself, but receiving such a well-preserved garment just three years after the end of World War II was of extraordinary high value for my family. For sure I wore this coat until I grew out [of it] and maybe my eight years younger brother, unfortunately [now] passed away, also derived benefit from this coat.”

“I would like to thank your parents for their generous and compassionate behavior back then. I would like to wish you and your family many years of health,” Engelhardt said in closing the letter.

For Rawls, the fact that this story has survived nearly 75 years is unique.

“There’s so much bad news today….shootings, and things like that; I just wanted to share some good news,” Rawls stated. “This story is good news. It warms my heart that my mother made such a donation all those years ago, and that the family who received the clothing felt that they needed to reach out and say thanks from the other side of the world.”