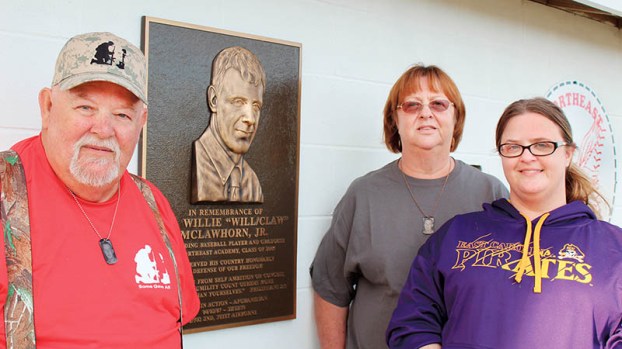 Members of the McLawhorn family (from left) Rev. Willie McLawhorn, Sr., wife, Diane, and daughter Melanie, pose beside a bronze plaque dedicated to their late son and brother, Sgt. Will ‘Claw’ McLawhorn, who was killed in action while serving in Afghanistan in 2010. | Staff Photos by Gene Motley

you’ve got to pay the price,

you’ve got to sacrifice …

LASKER – ‘Hero’ is a term that’s too loosely thrown about nowadays; but sometimes there are some who truly deserve it.

Sgt. Will ‘Claw’ McLawhorn, who died fighting in Afghanistan in 2010, and in whose honor an Easter baseball tournament is annually held here at Northeast Academy as a memorial, may have been one who so deserved.

He was a son, a soldier, a fighter, and someone who sacrificed by making the ultimate sacrifice.

High school baseball fans numbering over 100 have turned out for the two-day event every Easter Monday for the past seven years. It was organized by Sgt. McLawhorn’s father, Rev. Willie McLawhorn. 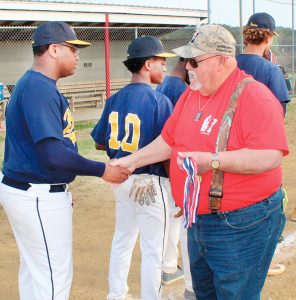 Rev. Willie McLawhorn distribute commemorative medallions to players and coaches of the four baseball teams participating in the 2018 Sgt. Will McLawhorn Memorial Baseball Tournament, held this week at Northeast Academy.

“Part of it was to keep Will’s memory alive,” the elder McLawhorn recalled. “It helped us in terms of our own grief because he played and loved baseball so much.”

Each year a portion of the monies raised from the event go to fund scholarships awarded to players from the participating schools.

“It’s not just him, but we’ve lost over 6,000 men and women in the war on terrorism scattered all over (the country),” the pastor continued. “Other families have gone through what we’re going through and this honors all those who have served as well.”

For the 2018 event, members of the Roanoke Valley Veterans Museum in Roanoke Rapids set up a memorial table where scrapbook photos of Sgt. McLawhorn were on display for viewing.

“We’ve got over 1,800 pictures and other memorabilia in various scrapbooks and on the walls dating back to the Civil War,” said Museum Lt. Commander Buck Robbins. “People from Halifax and Northampton counties contribute memorabilia just to honor their loved ones. Seeing a crowd this large, especially these kids, helps promote the veterans and what they stand for.”

From a youngster who built forts in the family backyard to enlistment, to becoming an infantryman and later a member of the famed 101st Airborne Division, McLawhorn served 15 months in Iraq and then reenlisted for five more years and was later deployed with his unit to Afghanistan. He grew to love his country and told his family he wanted to protect it, even if it meant giving his life.

“We’re here because of our veterans,” echoed Rev. McLawhorn. “Our country wouldn’t be where it is if not for our veterans, and we have to remember that. As an Air Force vet, there I was a little Bertie County boy, and I got to see the world from France to Japan; and I told Will this was what service to his country would open him up to.”

Among the participating athletes, Ridgecroft School’s Wyatt Liverman has already stated his desire to enlist in the US Marine Corps following his graduation this spring.  Being at this event has special meaning for him.

“This tournament shows that people around here really care about what people do in their lives,” Liverman said. “This shows that all these people really support their country, especially a fallen hero who came home in a casket; people will remember that. It’s not just about baseball; it shows support to (McLawhorn’s) family.”

Liverman will use the experience and perspective he’s gained from this as part of augmenting his future military service.

“This just motivates you because you want to now go and sacrifice everything that you can,” he stated. “There are things you can do in the community, but when you go above and beyond, it just gives you a feeling of self-pride because I know everyone here has got my back once I come back.”

Northeast Athletic Director Joella Brown has been part of the tournament committee since its inception.

“A lot of these kids – well, their parents – knew Will, though a lot of these kids weren’t in school yet,” she said. “But Rev. Willie, and the coaches and even the folks who do the fields, we all just work together so successfully. This is more than baseball. This past Monday was Will’s birthday so holding it around Easter-time – even when the holiday comes earlier or later – is always relevant. These kids need to know not just what Will gave up, but also why he gave it up. That’s worth fighting very hard for to keep his memory alive.” 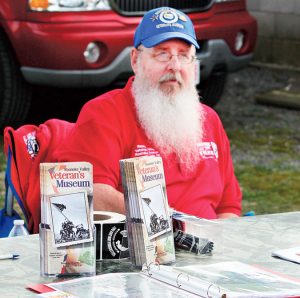 Jimmy Hyatt, Commander of the Roanoke Valley Veterans Museum in Roanoke Rapids, sits at a table display of photos and memories of veterans and other military service personnel on hand for viewing at this year’s baseball tournament.

In addition to the school, other sponsors from the Northampton County community have contributed, including one of McLawhorn’s former coaches, John Brown with Farm Bureau Insurance in Jackson.

“We’ve been very lucky to have the participation we’ve had,” Brown stated. “Hampton Farms has been with us since the beginning, along with T.D. Sports on our apparel, Watson Builders, and everybody who just comes out here and helps. And we can’t forget the kids who sacrifice their Easter vacation to come out here.”

Both the pastor and the Veterans Museum Commander hope those who are touched in even a small way by the tournament will try to ‘have the backs’ of all veterans they encounter.

“I came along in the Vietnam war era, and many veterans had a tough adjustment,” recounted McLawhorn. “Now, some of these younger veterans of the last 15 years are experiencing some of the same trauma. The fact that nearly 22 veterans daily commit suicide ought to say something to who we are as a people. We just have to do a better job of honoring our veterans; and, I think this is one of the ways we can do that.”

JACKSON – The Northampton Board of Commissioners approved a contract here Monday to help the county’s health department save some... read more