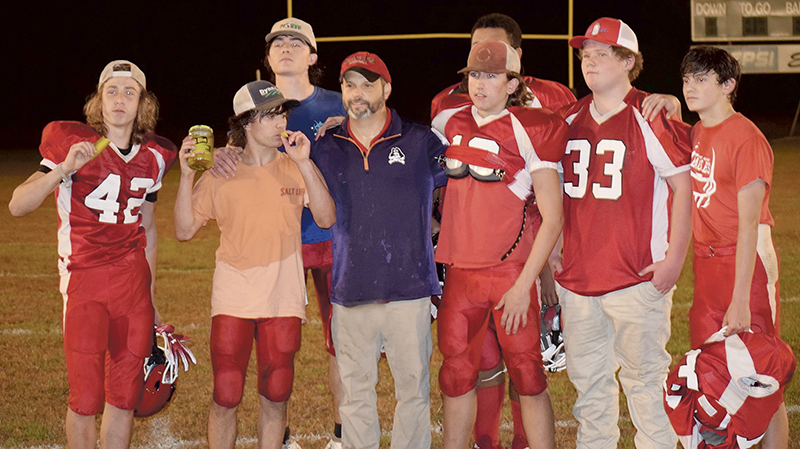 LASKER – In a season full of unknowns due to COVID-19, no one should be superstitious when it comes to playing a game for “all the marbles” on Friday the 13th.

That’s the scenario facing Northeast Academy’s undefeated junior varsity football team when they host Wayne Christian School of Goldsboro at 6 p.m. on Friday in the state championship game. The game was moved back one day due to the threat of inclement weather on Thursday.

However, no matter the day or the opponent, NEA coach Stevie Flythe and his Eagles are preparing for yet another battle.

After several blowout wins to start the regular season, one shortened in length due to the virus, the Eagles have been tested in their most recent outings.

On Oct. 29, Northeast held a two-touchdown lead at halftime in a game vs. Community Christian before holding on to a 22-16 victory.

The Eagles scored all of their points in the first half where Dawson Vann returned the game’s opening kick-off 55 yards for a touchdown. Dalton Vann then added two touchdown runs from scrimmage covering 90 and 42 yards. He finished with 141 yards rushing on just four carries.

Nathan Trevino stood tall on defense for the Eagles. He had eight tackles and recovered a fumble at his own five yardline that put the brakes on a Community Christian scoring drive.

In their regular season finale, Northeast rallied from an 8-6 halftime deficit to defeat Wayne Christian School, 12-8.

Trevino accounted for the game-winning touchdown when he broke off a 65-yard scamper to paydirt late in the game. He finished with 113 rushing yards on 10 carries.

Dalton Vann tallied NEA’s only points of the first half when he scored on a 10-yard run. He had 50 yards rushing in the game on seven carries.

“In a year of so much uncertainty and depressing things happening all around us, these young men, under the leadership of their coaches, gave us a couple of hours each Thursday to take our minds off of worldly things and gave us something to cheer about,” said Rev. Willie McLawhorn, who serves as the PA announcer at NEA home games, in a post on his Facebook page. “Thanks also to all the moms and dads who did essential things to help make the games happen, and a big thanks to our coaches: Stevie Flythe, Ray Trevino, Eric Sawyer, and Michael Smith.”