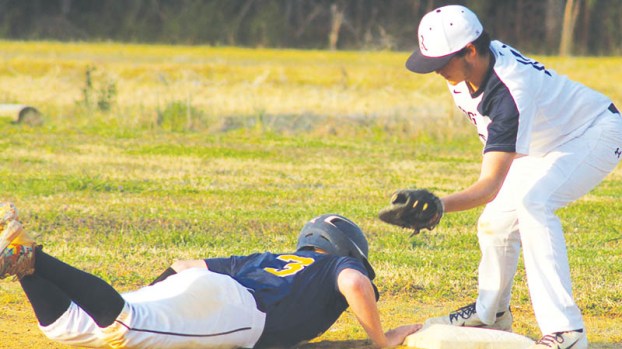 LASKER – Hertford County broke open a close game with 11 big runs in the final three innings en route to a 16-5 win over Ridgecroft School on the opening day of the Sgt. Will McLawhorn Memorial Baseball Tournament held here at Northeast Academy.

The Bears pounded out 17 hits and scored in every inning in opening defense of their 2017 championship.

Hertford County got its first run in the top of the first inning when Alden Lassiter walked, stole second, and scored on Edward Bradley’s RBI double to right field and it was 1-0 after a half-inning of baseball.

The Bears pushed across three more runs in the top of the second when Parker Bradley, Jaylan White, and Tyrek Beverly reached to load the bases. Alden Lassiter then smacked a two-run single scoring Parker Bradley and White. Beverly later scored on an RBI single by Evan Lassiter for a 4-0 Bears advantage.

Ridgecroft evened things in the bottom of the frame. After David Basnight and Lane Slacta both walked and Grayson Joyner reached on an error the bases were juiced.  Blake Birdsong got the Rams’ first RBI with a bases-loaded walk, then two more came home on Bryce Stevens’ two-run single. Birdsong then stole home on a double steal before Stevens was out in a rundown. The game was all squared at 4-all.

Both teams scored in the third inning. The Bears got a run on a Keyshawn Lassiter RBI groundout, and the Rams countered when Luther Glover scored on a wild pitch, knotting it up once more at 5-5.

From there, it was Bear hitting and pitching making the difference.

Two Hertford County runs came in the top of the fourth: Edward Bradley scored on a wild pitch and Parker Bradley drove in a run with a base-hit.  It was 7-5, Bears, after four.

A couple more Hertford County runs were put on the board in the fifth on, first, an Alden Lassiter sacrifice fly, and the other on an Edward Bradley RBI double. The Bears’ advantage was now four at 9-5.

The sixth became the deciding inning as Hertford County loaded the bases after Trent Munford and Parker Bradley walked and Cameron Lassiter singled. White then smacked a two-run double, Cameron Lassiter scored on an error, and Beverly had the highlight of the frame with a two-run inside-the-park home run he belted all the way to the football bleachers.  Edward Bradley and Kenneth Kornegay then added RBI’s for the final pair of Bear runs and a 16-5 advantage.

Ridgecroft then saw their last chance end in a strikeout and the game was complete in six innings.

Alden Lassiter pitched three innings for the win for the Bears, with relief help from Munford for the final three.  Slacta took the loss for the Rams as Glover and Zeb Askew also saw action on the hill.

Hertford County had 17 hits, led by four from the bat of Edward Bradley. Parker Bradley and Beverly had three hits each, two apiece for Evan Lassiter and White, and single shots from Trevor Lee, Alden Lassiter, and Cameron Lassiter.

Hertford County raised its record to 4-8 with their fourth win in five tries.  They faced host team Northeast Academy in the championship game, while Ridgecroft (5-3-1) met Northampton County in the consolation game of the McLawhorn tournament.