AHOSKIE – Hertford County pounded out 10 hits to back up the strong pitching performance of Trent Munford and Trevor Lee as the Bears opened Northeastern Coastal Conference play with an 8-2 win over Elizabeth City Northeastern here Tuesday night.

After a couple of scoreless frames, Northeastern got on the board first with a run in the top of the third inning.

Hertford County came back to score a pair in their half of the inning. A Parker Bradley single, followed by a walk issued to Jaylan White and Alden Lassiter reaching on an error loaded the sacks for the home team. Edward Bradley then delivered a two-run single to left scoring Parker Bradley and White for a 2-1 Bear lead after three. 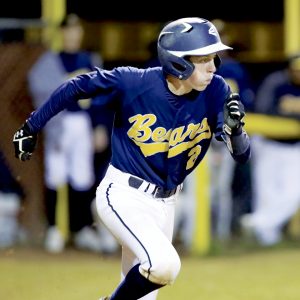 Hertford County struck for four more runs in the bottom of the fourth starting again with the bases loaded from back-to-back singles by Javier Correa and Parker Bradley and a walk to White. The next batter, Tyrek Beverly, hit a grounder the Eagles misplayed and two runs scored, and then White came around on the same play when Northeastern committed a second error. Beverly scored on an Alden Lassiter RBI single to center giving the Bears a 6-1 edge after four complete.

In the fifth the Bears plated another run when Harrison Spence singled to center. Pinch-runner Keyshawn Lassiter then advanced to third on a hard-hit double by Correa into the gap in right center. Lassiter scored on a Parker Bradley RBI single to left for a 7-1 Hertford County advantage after five innings.

Northeastern trimmed the lead by one with a run in the top of the sixth, but in the bottom of the frame, Beverly singled to right field, stole second, and came home on Alden Lassiter’s RBI double to right, plating the final Bear run of the game.

The Eagles’ last chance came with two on in the top of the seventh with one out, but Trevor Lee relieved Munford to get the last pair of outs and put the Bears in first place after a conference-opening win.

Munford went six-and-one-third innings for the win allowing two runs on six hits with seven strikeouts. Parker Bradley led the way at the dish with three hits while Correa and Alden Lassiter had two hits each. Beverly, Spence, and Edward Bradley had one hit apiece.

“It’s always good to win the conference opener,” said Bear head coach Chris Towell. “Tonight we got great pitching, timely hitting, and played great defense. We put all three together and we also took advantage of their mistakes.