Hertford County surrendered five runs in the top of the first inning, but still roared back to trounce North Pitt 21-5 in a shortened affair that only lasted three innings under sportsmanship rules.

After trailing 5-0 in just a half-inning, Hertford County sent 17 batters to the plate in their half of the frame and put up a dozen runs. Weaver, Karren New, Brionna Morings, and Mya Mabine all drove in runs.

The Lady Bears got seven more runs in the second inning. Bailey Brock, New and D.L. Watford collected RBI’s thanks to bases-loaded walks, Weaver collected her fifth run-batted-in, and Merritt closed out the scoring with an inside-the-park three-run home run.

Hertford County did not surrender a hit. Emily Rhodes started and gave up five runs, mainly on five walks and a pair of hit batters. Merritt closed it out with no runs, no hits, and six strikeouts. 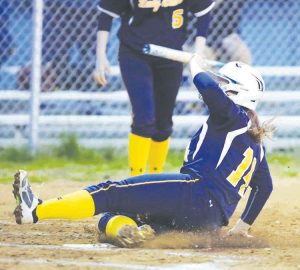 Hertford County drove in 18 runs on 10 hits. Jessica Weaver was 2-for-2 and drove in five runs. Emily Merritt was 2-for-3 and had three RBI, including a home run. The Bears also swiped nine bases.

Hertford County evens their record at 3-3 with the win.

The Lady Warriors Varsity secured the win with a four-run outburst in the second inning.  With two runners in scoring position, Lindsay Smith singled to left field producing both, while Isabelle Phelps scored on a passed ball to make it 3-0, Lawrence.  The final run of the frame came when Smith scored on an error.

Northeast appeared to get something going in the third inning when Hannah Drewette walked, stole second, and went to third on a single by Kiersten Polson. But the Lady Eagles couldn’t capitalize.

After getting three more runs in the third inning, Lawrence sewed the game up when they notched eight runs in the fourth. Katlynn Stotesberry, Smith, Claire Dail, Lauren Baker, Gracen Rogers, and Isabella Conigliaro all provided the lightning as each batter drove in runs in the big inning.

Stotesberry toed the rubber for LAW to get the win. She lasted three innings, allowing no runs and the one hit while striking out three and walking none. Baker, who came on in relief in the fourth, sat down all six batters she faced. Lawrence tallied 13 hits on the day. Rogers, Smith,  Phelps, and Dail all managed multiple hits for the Warriors with Smith and Rogers each collecting three.

Brittany Byers got the loss for Northeast, lasting four innings, allowing 13 hits and 15 runs while striking out one. Polson went 1-for-2 at the plate to lead Northeast.

Lawrence picked up their fifth victory and are 3-0 in TIC play.  Northeast is still in search of its first win.