AHOSKIE – A wild pitch late scores the only run North Pitt would need here Monday night, and the Panthers held off a rally by home-team Hertford County to edge out the Bears, 1-0, in non-conference baseball play.

The game was a pitcher’s duel between Hertford County’s Trent Munford and a pair of North Pitt aces, Brandon Warren and Jacob Peaden.

Hertford County got their first chance to score in the bottom of the second inning when Munford stroked a two-out single to centerfield and stole second, but didn’t advance when a strikeout ended the inning and kept the game scoreless. 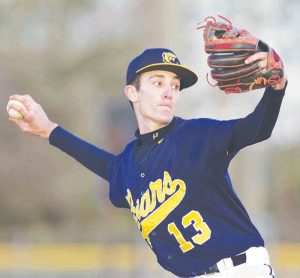 Trent Munford struck out 11 batters and gave up just three hits, but it wasn’t enough to get his Hertford County High baseball team a win as the Bears fell to North Pitt 1-0 at home Monday night. | William Anthony Photography

Munford was cruising through the first three-and-a-half innings, but uncorked a wild pitch in the top of the fourth, and North Pitt scampered home with what would be the only run of the game.

The Bears threatened again in the bottom of the fifth when Edward Bradley poked a two-out single through the infield.  Bradley went to second when Javier Correa singled to left, but with runners on first and second a groundout ended the threat and it remained 1-0 after five.

Hertford County’s last chance came in the bottom of the seventh. Munford led off with an infield singled.  One out later, Munford advanced to third on a Bradley double to left field. Correa was intentionally walked to load the bases, but despite the bags being full with one away, a strikeout and a groundout ended the game and left the Bears with a crushing loss.

Munford went the distance on the hill, pitching seven innings and tagged with the tough loss despite the one run, earned, three hits and 11 strikeouts.

Hertford County had six hits.  Munford and Bradley had two hits each while Correa and Alden Lassiter had the other hit apiece.

The Bears struggles continue as they fell to 0-7.  They played Southwest Edgecombe Wednesday evening in a game not completed by press-time and will host Northampton County at home today (Thu.) at 5 p.m.