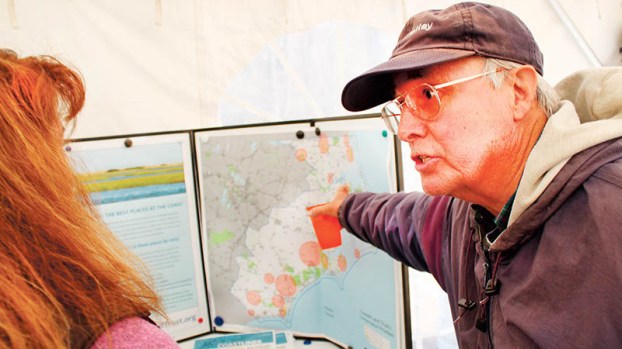 One of the hundreds of donors who attended the ‘Celebration at Site X’ near Merry Hill on Saturday points to several locations (in red) the NC Coastal Land Trust is helping preserve as nature areas along the coast. | Staff Photos by Gene Motley

MERRY HILL – It’s part conservation, part ecology, and there’s also a bit of history thrown in; all part of the mission to save the land we all love.

When the NC Coastal Land Management Trust (NCCLT) found out a portion of 1,000 acres located along 3.5 miles of Salmon Creek were permitted for a 212-slip boat marina and some 2,800 housing units, they moved quickly to acquire the property from its local owners, but it came with a hefty price tag. So large, the group needed more than loans, they needed conservation grants, and more importantly: donors to step up and help with the purchase and the protection. 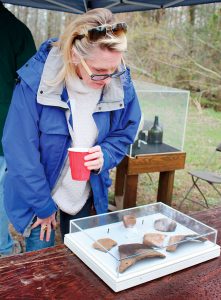 Jan Winborne of Edenton, one of the Land Trust donors, observes a display of borderware artifacts used by 16th century colonists excavated from Site X on Salmon Creek in Bertie County just this past year.

The area, located in Bertie County and bordering the Chowan River where it spills into the Albemarle Sound, was purchased thanks to donations from persons across the state, but primarily in Bertie and Chowan counties in 2017. As a way of saying thanks for helping raise the $5 million needed for the purchase, the Land Trust sponsored a tour and an Oyster Roast at the property this past Saturday.

But more than just an afternoon of great seafood, the day’s activities featured a tour of Site X, the area of archaeological research by The First Colony Foundation where Algonkian Indian relics have been found along with English artifacts attributable to the period and indicative of settlement by the Roanoke colonists believed to have survived and left Roanoke Island in Dare County, and famously re-settled in Bertie known as ‘The Lost Colony’.

“Acquiring this has been a win-win for us,” said Vann Pearsall, Director of Development for NCCLT. “We were able to protect this acreage because it’s not only ecological, but also for its historical significance of the things that were here before.”

The group worked with two different owners groups of the land area on the purchase. Eventually, the entire parcel will be turned over to the state of North Carolina to be a state natural area.

“A state natural area is similar to a state park, but does not have the same level of infrastructure, like camping and things like that,” said Lee Leidy, Northeast Regional Director of NCCLT. “It’s more of a protected nature area, but one that’s still open and used by the public.”

Leidy says she was sold on the property after visiting in 2016 and that’s when the NCCLT began reaching out to possible partners. These included, among other parts of their new business model: quickly reaching out to the Conservation Fund for a multi-million dollar loan, and a $200,000 grant from the Enviva Forest Conservation Fund. On August 30, 2017 it was all finalized.

The location is nearly adjacent to “Tall Drink of Water”, the 137-acre Bertie County Chowan riverfront property purchased by the county in 2015. That property will one day hopefully be developed into a recreation area and provide public water access for recreation and tourism.

Leidy said the area hopes to be open to the public sometime later this year if all proceeds as planned.

“Today we really just wanted an opportunity to really just introduce people to Bal Gra, Site X, and to the Land Trust,” she acknowledged.

“This has just been such an extraordinary piece of property,” said Land Trust Executive Director Camilla Herlevich. “It’s really one of the most exciting pieces of land we have ever saved.”

Herlevich said the Land Trust has saved nearly 70,000 acres as natural area stretching from Currituck County to Brunswick, but they are especially proud of the effort at Salmon Creek.

“A healthy coastal environment rewards us all and offers wonderful new places to enjoy not only nature, but also coastal history,” she noted.

“This is truly an amazing place which may hold the key to one of the greatest mysteries in United States history,” Herlevich added. “In addition to protecting wildlife habitat and water quality of the creek, this land is brimming with historical significance as it was once the homestead of North Carolina colonial Governor Thomas Pollock.”

Dr. Nickolas Luchetti of James River Institute for Archeology in Virginia was the keynote speaker for a crowd of over 100 donors packed into a makeshift tent to hear about the excavation of Site X.

Luchetti said most of the excavations are finished pending the sale of the property to the state; but to date, a treasure trove of artifacts have emerged from the sandy soil.

“We basically just did follow-up excavation in 2017,” Luchetti said. “We found more borderware, ‘L-shaped’ nails called tenterware used for stretching skin or sailcloth to make shelter, and fish jars. It’s just more evidence that someone was here in the 16th century before Nathaniel Batts (the first recorded European to permanently settle in North Carolina in 1655) when there was nobody here but Roanoke colonists.” 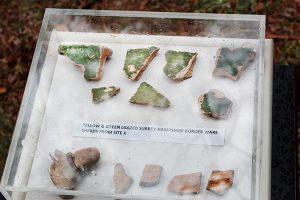 These borderware pottery shards, from a 2016 dig at Site X, are thought to date back to the 15th century and may have been used by both Native Americans and English colonists – perhaps from the Lost Colony

“In September, it’s possible that we may go back to Roanoke Island (Dare County), but I think we’re closed out here at Site X”, he said. “I think we have convincing evidence there’s a small group of Roanoke colonists who were here at Site X for a short period of time, survivors from The Lost Colony that relocated to this area after leaving Roanoke Island in the late 1580s.

“What they were doing here is unknown, but it’s a possibility they were a splinter group living on the periphery of the Indian village, and there’s a strong likelihood that some of them just melded in with the Indians of North Carolina,” Luchetti concluded.

Apart from the historic significance, there exists an impressive array of wildlife: bald eagles, wood ducks, and warblers along a scenic backdrop of towering cypress trees.

Once all funds needed to repay the loan have been raised, the Land Trust will transfer the property to the state’s Division of Parks and Recreation for management as the Salmon Creek State Natural Area. Legislation authorizing creation of the new state natural area was enacted this summer by the N.C. General Assembly. Until that time, expected late in 2018, the land will still be subject to farming and hunting leases and will remain closed to the public.

MURFREESBORO – The town of Murfreesboro continues to show signs of fiscal improvement. That’s according to the audit report the... read more