Delores Watford led the Lady Bears by driving in four runs. Watford went 3-for-3 at the plate. Watford collected her RBI’s on a home run in the first and a triple in the first. She later got a single in the fourth and she also scored three runs.

The Lady Bears basically put the game away in the first inning when they sent 16 batters to the plate and scored a dozen runs; three of those runs crossed the plate on Watford’s round-tripper. 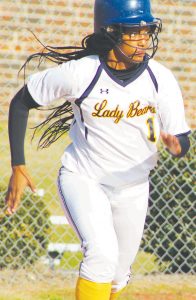 Hertford County’s D.L. Watford legs out a base hit in Friday’s game against North Pitt in Bethel. Watford had a home run, triple, and single and pitcher Emily Merritt hurled a shutout as the Lady Bears blanked the Lady Panthers 15-0.

Abby Culler led off the bottom of the first inning with a base-hit for North Pitt, but that would be the only safety Merritt would surrender against the Lady Panthers.

Merritt led the Bears to the win in the pitcher’s circle. She lasted the maximum four innings, allowing zero runs on one hit while striking out five and walking none.

Hertford County racked up a dozen hits in the game. Watford and Merritt had three hits each, while Jessica Weaver and Mya Mabine had two hits apiece. Merritt led the Bears on the base paths with four stolen bases, as they ran roughshod over the Panthers with 13 stolen bases for the game.

Gracie Meeks started the game for North Pitt and took the loss. She went four innings, allowing 15 runs on 12 hits and striking out two. Culler went 1-for-2 at the plate to lead North Pitt at the dish.

The win broke a three-game losing slide for Hertford County (2-3) who played a return game with North Pitt on Monday in a game not completed by press time. Next up for the Bears will be Southwest Edgecombe at home on Wednesday at 5 p.m.

MERRY HILL – A five RBI day for Lauren Baker on the softball field and efficient pitching from Sawyer Mizelle on... read more