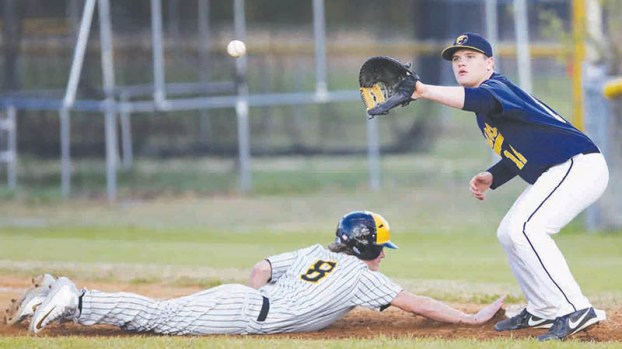 Perquimans County’s Mason Votava (#8) dives back safely into first base ahead of the throw to Hertford County’s Kole Liverman. The Pirates spoiled the Bears’ baseball home opener by taking a 9-2 win. | William Anthony Photography

AHOSKIE – Perquimans County broke open a tight one-run game with a pair of runs in the top of the sixth inning and the Pirates went on to beat Hertford County 9-2, spoiling the Bears’ home opener in the non-conference tilt.

After a scoreless pitcher’s duel between the home team’s Trent Munford and Perquimans’ Devin Mathis through first two innings, the Pirates opened the scoring with three runs in the top of the third.

Hertford County got one of those runs back in the bottom of the frame; Jaylan White singled to left field and scored on Tyrek Beverly’s RBI double into the gap in left centerfield. Beverly went to third on Alden Lassiter’s groundout, but a strikeout left him stranded on the hot corner. Perquimans led 3-1 after three complete.

Hertford County crept within a run when they scored in the bottom of the fifth inning. Evan Lassiter drew a walk and stole second. White then walked and Lassiter would score on an infield RBI single by Beverly. Both White and Beverly advanced into scoring position on Alden Lassiter’s groundout, but a strikeout ended any further threat by the Bears.

Perquimans would score another pair of runs in the top of the sixth inning to lead it 5-2 after six.

The Pirates’ final four runs came in the top of the seventh to make for the seven-run difference in the Perquimans victory.

Hertford County had four hits; two by Beverly and one each from Alden Lassiter and White.

The Bears fall to 0-2 and will face Gates County Saturday at 2 p.m. at home. Their next away game is North Pitt on Tuesday in Bethel.