Hertford County surprised Fairmont High School with a taste of its own medicine by coming out in a full-court press in their second round 2A NCHSAA state playoff game here Thursday night. But the pressure wilted in the end and the Golden Tornadoes won their 28th of the year while ending the Bears’ season, 84-68.

“We had a good overall season,” said Bears head coach Charles Simmons. “We challenged for the (Northeastern Coastal) conference championship and we made it to the second round of the state playoffs. 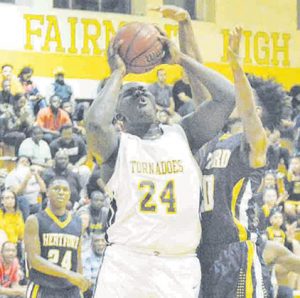 Fairmont forward Nalijha Pittman (#24) collides with Hertford County’s Michale Cooper (right) in the Golden Tornadoes’ 84-68 home win in the second round of the NCHSAA 2A state playoffs on Thursday. The road loss ended the Bears’ season. | Jonathan Bym / The Robesonian

The Bears were led by Michale Cooper who finished with 25 points, 13 of those coming in the first half; he also hauled down 14 rebounds. Talik Totten added 13 more points for Hertford County. Fairmont, meanwhile, had four players in double-figures.

Thanks to the press, Fairmont committed a host of first quarter turnovers, and the Bears capitalized. The lead see-sawed back and forth in that period, as Hertford County used their speed to counter the Golden Tornadoes’ pressure defense and converted Fairmont’s turnovers into easy lay-ups. It was only a three-point difference at the end of the frame, 17-14, as Cooper scored nine points in the quarter.

Totten gradually found his range in the second quarter, scoring six points and keeping the Bears close in the contest, but with their size inside, the Tornadoes were able to stretch the lead a bit and Hertford County trailed 39-28 at halftime.

The Bears were still hanging around in the third quarter, despite falling behind by as many as 10 points early, the Bears were able to get within six by the 4:00 mark. Much of their offense came from Lance Hunter and Zion Riddick, who scored six points apiece, but the post play from Fairmont drove the offense at the tail end of its press, now producing fast breaks when they were able to get numbers on the offensive end. They stretched it to a 15-point lead headed to the fourth quarter, 59-44.

Cooper and Totten, scoring 10 and seven points, respectively, in the fourth quarter, continued to drive the Bears’ offense; but defensively, the game was beginning to take its toll on the Bears. When the Golden Tornadoes’ Derrick Arnette connected on a corner three-pointer coming with more than six minutes left in the game, it gave Fairmont a 21-point lead, 67-46. Despite Hertford County scoring one point less than the Tornadoes in the quarter, 25-24, it was just a matter of time before the host team put the game away for the 16-point win.

Fairmont (28-1) advances to the third round of the 2A playoffs for a seventh year in a row; the Tornadoes will next play Reidsville.

AHOSKIE – Except for a few tense minutes in the fourth quarter, Hertford County was totally in command of their... read more