The Northeastern High Eagles posted a 68-63 win over the home team Bears in the Northeastern Coastal Conference tournament boys’ title game here Friday night. It marked the third time this season the Eagles had taken a victory.

With the score tied 57-all midway through the fourth quarter, Northeastern made 9-of-11 free throws in the final four minutes to seal the win. Player of the Year Eagles swingman Damar Sutton led all scorers with 29 points. 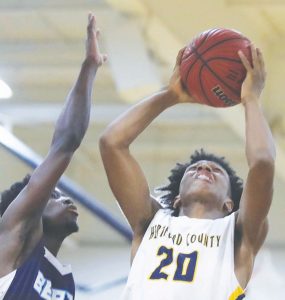 “We played better team ball in the second half,” said Eagles coach Ron Nixon. “Our seniors tell our younger players to show poise in close situations, and tonight they did.”

The Bears had four players in double figures.

“I was pleased with our effort,” said Hertford County coach Charles Simmons. “We just have to make smarter decisions with the ball down the stretch in close games.”

A pair of three-pointers from Sutton and Clifford Shaw helped stake the Eagles to an 8-2 early lead before the Bears, trailing 15-11 late in the first period, strung together an 8-0 run to seize a 19-16 lead by the end of the quarter.

Normally a good jump shooting team, the Bears didn’t hit a single three-pointer in the second quarter, still they maintained a lead thanks to success in their transition game. Northeastern never let the Bears get a run in order, and when Sutton hit a triple with three minutes left in the half, the Eagles had re-taken the lead, 27-26. But Talik Totton’s short jumper with less than two minutes to go knotted the game at 32-32. Michale Cooper and Lance Hunter scored a pair each in transition off fast-breaks, and it was good enough to stake Hertford County to a 36-33 lead at halftime.

The Bears maintained that lead, though it never got above three points in the opening minutes of the third quarter. Leading 44-41 on a Cooper lay-up, Hertford County saw the Eagles’ Garfield Brown score six straight and make a turn-around for Northeastern, giving them a 47-44 lead. Cooper’s put-back reclaimed the lead for the Bears, 49-47, but the Eagles drained a pair of treys giving Northeastern a six-point lead headed to the final frame.

Hertford County scored the first five points of the fourth and crept within one point at 55-54. Brown made another jump shot for the Eagles before Delmonta Cherry – plagued most of the game with foul trouble – backed-up and drained a trey that tied it at 57-all. Northeastern answered with a rebounded miss and a three-pointer of their own and it was back to a five-point lead. From there, Nixon called on his charges to attack the Bears inside, leading to fouls and the Eagles’ parade to the free throw line. With the score 63-59, Eagles, Hertford County missed on three straight trips up court. Northeastern built the margin to 66-60 with less than a minute to play. The Bears’ last gasp came as reserve Keyshawn Taylor was fouled scoring on a lay-up and the subsequent free throw made it a three-point play with 11 seconds left. But the Eagles dribbled out the clock and claimed the night’s hardware; first as conference regular-season, then as tournament champions.

The win helped Northeastern (20-4) earn the number-five seed in the upcoming 2A state championships, and a home game in Elizabeth City Tuesday with Randleman. Hertford County (15-10) will host Burlington Cummings on that same day back in Ahoskie at 6 p.m.