LASKER – “Our motto is: all about the experience,” said Kathryn Long, a student of Northeast Academy and participant in the school’s robotics team.

The Northeast Eagles Robotics Division, or N.E.R.D. for short, experienced competing on January 21 at the FIRST Lego League state championship. The seven students, who traveled across the state to Greensboro for the competition, saw the culmination of their hard work pay off with a Presentation Award, which recognizes a team which has effectively communicated the challenge and their innovative solution to the judges.

This comes not long after they were awarded the Core Values Inspiration Award, recognizing their teamwork, at the regional competition.

“Everyone should be proud of what these kids accomplished,” said coach Tony Usalis, noting how it was difficult to win any trophies at these competitions, yet alone two. 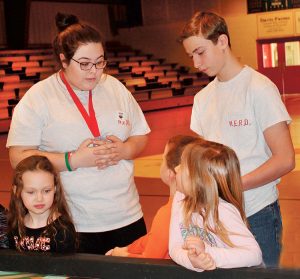 Kathryn Long and Jayden Watts (background, left and right) explain to a group of younger Northeast Academy students how the robot goes through its maneuvers. | Staff Photo by Holly Taylor

develop enthusiasm for Science, Technology, Engineering, and Math (STEM). The teams are given a real-world problem to tackle, and they have only a few weeks to develop a solution before the competition.

This year’s challenge was hydrodynamics.

During the research portion of the challenge, the students designed a “one stop drop” app which would help monitor things like water usage and conservation. At the competition, they had five minutes to present their information to the judges. The team chose to perform a superhero-themed skit to concisely explain the problem and the solution they worked on.

“The rogues are trying to end the world by wasting all the water, so then the superheroes come up with a plan, which is our app, to stop them,” Long explained. “The judges were really impressed with the way we approached it, making it a fun way and something that appeals to other people by taking a superhero approach.”

Creating their own robot to carry out table-top “missions” was another aspect of the challenge the team had to face. FIRST provided the computer software to use, but the students built the robot and created the code to operate the machine itself.

“It took a lot of trial and error,” admitted team member Chase Futrell.

Futrell explained the programming process: they push the robot forward by hand and a counter keeps track of how many degrees each wheel turns. They input those numbers into the laptop’s software program, and then continue repeating the process until they have the code for where exactly they want the robot to go.

During the state competition, the teams had three rounds, each two and a half minutes long, to complete as many “missions” with the robot as possible.

“Everyone gets a chance to run the robot in the competition,” said assistant coach Dana Boone, explaining that they wanted the whole team to be able to participate in all aspects.

A total of 59 teams went to the state competition, and Usalis estimated that Northeast was the smallest school there, facing against some larger schools who even have robotics courses in their curriculum.

Because of their small size, Boone noted with gratitude that many generous local sponsors helped the N.E.R.D. team purchase materials, and Usalis added that the size of the school itself played a role in the students’ success, especially in the category of Core Values.

“The teachers here make it possible with the small school atmosphere where character and family is a part of life. And that’s what’s critical to get judged on,” he explained.

Usalis was proud of how well the team performed during both the regional and state championship, explaining that the coaches stay on the sidelines and aren’t able to “call any plays” in contrast to other sports coaches.

When asked why she wanted to participate in the program, Long answered initially that it would look good on a college resume, but then she also admitted it was for the experience itself too.

“Being on a robotics team and getting to do something that a lot of other schools don’t. That’s something big, in my opinion,” she said. “I think that’s why a lot of us like to do it.”

With the experience of competing at the state level fresh in their minds, N.E.R.D. says they’re already starting to develop ideas for next year.