Hertford County would fall to Northeastern one night later at home for their first league loss of the season, but Friday night they had plenty to celebrate.

Lance Hunter and Talik Totten both scored 19 points each to lead Hertford County while Bertie’s Quatravis Riddick took scoring honors for Bertie in the losing effort with 23 points.

“This was a big win,” said Bears coach Charles Simmons. “They knew they could beat us after doing it in the Christmas tournament, so we had to be extra intense for this one, and we were.” 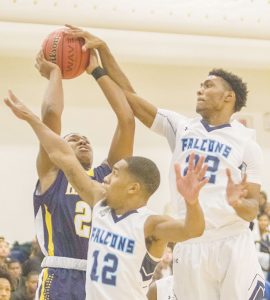 Bertie’s Jamarri White (right) makes a clean block of a shot by Hertford County’s Lance Hunter in Friday night’s Northeastern Coastal Conference game in Windsor as Joshua Burden helps defend. Hunter and his teammates would get in the last word as the Bears smacked the Falcons 71-55. | photomedoc.com / Steven Ferguson

A three-point play and a short jumper from Totten helped establish the Bears with a 9-0 lead. Riddick broke the run with a three-pointer for Bertie’s first basket, but back came Totten with back-to-back threes pushing it out to a 10-point lead at 15-5. Totten would score seven more points and had all but one of his 19 points in the first seven minutes of the game. Bertie couldn’t stop him, or the other Bears for that matter, and trailed 26-8 after the first quarter.

A minute and a half was gone in the second quarter and the Bears were nursing an 18-point lead, 28-10. Totten then made one of two free throws to finish his scoring for the night and up the margin to 29-10. From there Bertie settled down, and the scoring became a bit more balanced. But the Falcons had a huge deficit to overcome and only dented it a little bit by halftime, 39-23.

As hot as Totten was in the first half, so too was Lance Hunter in the second period. His back-to-back lay-ups made it an 18-point lead for the Bears again, 45-27. It was 19 again, 49-30, before Bertie finally strung together a run thanks to center Jaqwan Baylor. But he was saddled with foul trouble and Bertie’d only made it a 15-point deficit, 56-41, headed to the fourth.

Bertie never let the Bears’ lead get above 20, but they could never get it below 10 in the final eight minutes. By then, Simmons cleared his bench and while Hertford County got it up to a 19-point margin once more, 69-50, before they settled for a 16-point victory.

“We did a good job getting the big-kid (Baylor) in foul trouble,” said Simmons. “I’m glad we didn’t show many effects from the snow-day.”