“We’re looking forward to hosting another Classic,” said Tournament Director and HCHS boys’ basketball coach and athletic director Charles Simmons. “I think it’s going to be one of the most competitive tournaments we’ve had in a while and I think that’s going to make for an exciting event. All the teams are so much better this year and we look forward to it every year and it’s also great for all the fans of the (various) schools.” 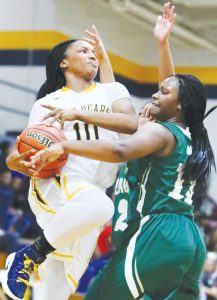 “We welcome the teams participating in this, our 27th year of the Holiday Classic,” said Cal Bryant, Editor of the Roanoke-Chowan News-Herald who, along with the late Richard Murray (former coach and Athletic Director at HCHS) founded the event in 1990.

“Over the years, the Holiday Classic has seen some memorable games and memorable players,” Bryant added. “The event has served a dual purpose over that time, affording the student-athletes an opportunity to compete over the long holiday break, and serving as a social event for the fans. Speaking on behalf of our family here at the Roanoke-Chowan News-Herald, we’re extremely happy to continue as the main sponsor of this great event and look forward to many more years to come.”

Following the same format as in 2016, Hertford County and Bertie will receive first-round byes in boy’s and girls and won’t begin play until Wednesday.

Four first-round games will open the tournament Tuesday beginning with the 4 p.m. girl’s game between Rocky Mount Prep and Northeastern; that’ s followed at 5:30 by the defending champ Northeastern boy’s against Rocky Mount Prep. The evening games will begin at 7 p.m. with the Plymouth versus Gates County girls, and the nightcap will end with an 8:30 game of Plymouth’s boys facing off against the Red Baron boys.

Wednesday will see the semi-finals of the event taking place with the aforementioned four teams that had byes seeing their first action.

The winner of the Northeastern-Rocky Mount Prep girl’s game is first up at 4 p.m. against defending champ Bertie.   Bertie’s boys will face the winner of Tuesday’s first round boy’s game between Rocky Mount Prep and Northeastern. Hertford County’s Lady Bears girl’s team will lead off the night games beginning at 7 p.m. against the Gates County-Plymouth winner from Monday; and the final game of the evening at 8:30 features Hertford County boys against the Red Barons-Vikings winner.

The consolation games will be played beginning Thursday. Girl’s and boy’s team losers from the first two days of action will play for fifth-place beginning at 4 p.m. with the girl’s game, followed by the boy’s around 5:30.   At 7 p.m. the third-place girl’s game features the losers of the two Wednesday semi-final games, followed at 8:30 by the losers of the previous day’s boy’s semi-final.

Championship Night will be Friday, Dec. 29 starting with the girl’s title tilt at 6 p.m. followed at 7:30 by the boy’s match for the top prize. 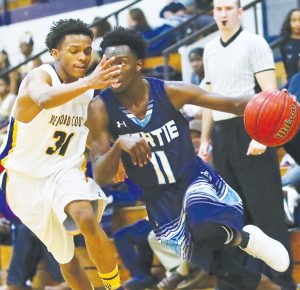 Following the games, trophies will be awarded to the top-two teams as well as the naming of the girls and boys All-Tournament teams. The Cal Bryant Trophy – named in honor of the long-time News and former Sports Editor of the News-Herald – will go to the Most Outstanding girl’s player, and the Charles Simmons Trophy is being awarded to the Most Outstanding boy’s player. The team who displays the best attitude and effort over the course of the tournament will receive the Richard Murray Sportsmanship Award, named for the late former coach and athletic director at the old Ahoskie High School and later first-ever coach and A.D. at HCHS.

AHOSKIE – Hertford County shook off a lethargic first half, stepped up their transition game, and outran Norfolk Christian in... read more