AHOSKIE – Hertford County shook off a lethargic first half, stepped up their transition game, and outran Norfolk Christian in a non-conference game here Friday night, posting a 79-68 win.

Talik Totten scored a career-high 37 points to lead a trio of Bears’ double-figure scorers as Hertford County climbed above the .500 mark at 4-3. Three Ambassadors also scored in double-figures led by Treshawn Brown with 21. 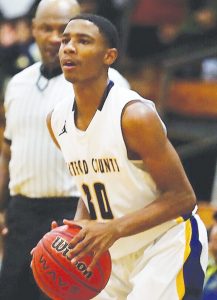 Hertford County’s Talik Totten sizes up the rim ready to nail a jumper in an earlier game. Totten set a career high with 37 points as the Bears ran over Norfolk Christian 79-68. | William Anthony Photography

“We didn’t have any intensity in the first half and we fell behind,” said Bears coach Charles Simmons. “In the second half we picked it up creating steals on defense and finishing strong around the basket offensively. I was pleased with our effort, especially in the second half.”

Though they never took the lead in the first quarter, Norfolk Christian kept the Bears in their sights. Tying the game three times, the last one at 13-13, the Ambassadors never could surge ahead, thanks in large part to Totten, who finished the period with 16 points. The senior scored from all over the court: in the paint and outside with a pair of triples that fell. Still, Hertford County’s lead was only three points after the first eight minutes, 20-17.

NCS re-grouped in the second quarter, outscoring Hertford County 11-3 in the first five minutes of the frame, and seizing a six-point lead, 28-22. The Ambassadors did a much better job defensively on Totten – holding him to just two points. The Bears managed to re-group and reeled off six straight to tie the game a fourth time, 28-all. But all Hertford County could muster the rest of the way was a pair of free throws, and they found themselves trailing at halftime to the visitors, 33-30.

It was slow going for the Bears opening the third quarter as they fell behind by six, 36-30, early. Then after a driving lay-up and a foul shot for an old-fashioned three-point play, Hertford County was looking up at a seven-point deficit: 39-32. But a better effort rebounding allowed the Bears to get out much faster on the break and the game became a track meet. Soon the home team had eliminated their deficit and was knotted with NCS 44-44 on a three-point play by Michael Savage. It was tied again 46-all on a three-pointer by Totten, but the Bears never trailed again. They finished the period with a flourish 7-2 and were ahead by that many headed to the fourth, 59-52.

The Bears blew the game open from there, as NCS found itself plagued by foul trouble. Hertford County’s zone defense, with man-to-man out front led to more steals and they turned those swipes into points. When Savage scored in the paint, the Bears had a double-digit lead, 72-61. Attacking the inside, Hertford County made seven-of-ten foul shots as one after another Ambassador fouled out. When Totten drained two free throws for his 36th and 37th points of the night, the Bears had their biggest lead 78-62. The parade to the free throw line continued, as Norfolk closed it out with a pair of three-pointers before the horn sounded, but by then the Bears had won convincingly.

After a date tonight (Tues.) in Gatesville against the Red Barons, Hertford County is off for their holiday break. They will open play hosting the Roanoke-Chowan News-Herald Holiday Classic on Dec. 27 against the winner of Plymouth-Gates County, the two teams that will play on opening night (Dec. 26) when the tournament begins.