The Braves halved that lead in the bottom of the fourth inning with a pair of runs.  Spencer Simonowich singled to right field and advanced all the way to third base when Edward Bradley reached on a two-base error.  Both runners scored on Trevor Lee’s two-run double into the gap in left centerfield, but Ahoskie could plate no more, and it was 4-2, Hertford. 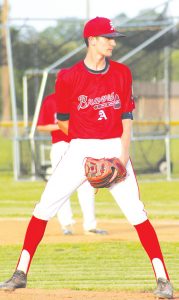 Ahoskie Post 102 pitcher Trent Munford toes the rubber and stares down a batter in a recent junior American Legion game. Munford and his Braves teammates fell to the Hertford Pirates Tuesday night 9-7 in a conference match-up. | Staff Photo / Gene Motley

Ahoskie got one of those runs back in their half of the sixth as Steven Futrell got a lead-off walk but was erased when Edward Bradley reached first on a fielder’s choice.  Bradley went to third on Lee’s second two-bagger of the game.  Jordan Robinson then drew a base-on-balls to load the bases before Bradley scored on a Tyrek Beverly RBI ground-out.  Perquimans still held a four-run edge at 7-3 after six complete.

The Pirates scored their final two runs in the top of the seventh to lead it by six runs again at 9-3, but Ahoskie wasn’t done.

In the Braves’ half of the seventh, Trent Hobbs reached on an error, Ethan Hughson got a base hit, and Edward Bradley reached on an error to load the bases.  Lee then made it a hat-trick with his third double of the game to right field to drive in a pair of runs, and Parker Bradley followed with a two-run single to left field.  With the potential winning run in the on-deck circle a line-out back to the pitcher ended the game.

Hunter Mitchell pitched the first four innings and was hit with the loss while Trent Munford and Hobbs came on in relief for Post 102.

Ahoskie had 10 hits led by Lee with three doubles and four runs-batted-in.  Ryan Rowe had two hits, while Mitchell, Simonowich, Hughson, Edward Bradley, and Parker Bradley had one hit each.

“We had a good effort,” said Ahoskie coach David Ellis. “We fell behind early and we just couldn’t recover.  We also made a couple of errors that hurt us.”