GARYSBURG – The grim discovery of a woman’s body in a farm field off Macon Price Road near here Tuesday morning has turned into a homicide investigation.

The victim has been identified as 24-year-old Shawte Williams of Garysburg, according to Captain Patrick Jacobs of the Criminal Investigations unit of the Northampton County Sheriff’s Office.

Jacobs said Williams died as the result of multiple gunshot wounds. It is not known at this time if Williams was shot and killed at the 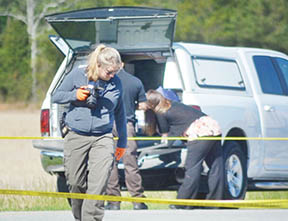 An SBI agent examines a portion of Macon Price Road near where the woman’s body was located early Monday morning. The SBI is assisting the Northampton County Sheriff’s Office in the investigation. | Photo courtesy of www.rrspin.com

location where her body was found, or if the murder occurred at another location and the body was moved.

The body was spotted by a passerby at around 6 a.m. Tuesday and that person called the Northampton Sheriff’s Office. The location was near the intersection of Macon Price Road and US 301 between Garysburg and Pleasant Hill.

The NCSO is being assisted by the North Carolina State Bureau of Investigations.

Jacobs said the investigation into this incident continues and the Northampton County Sheriff’s Office encourages anyone with information that could help in the apprehension and arrest of anyone involved to please contact the Sheriff’s Office at 252-534-2611 or Crime Stoppers Line at 252-534-1110 or S.B.I. at (919) 662-4500.

Jacobs added that those with information in regards to the last time Williams was seen or talked to within the past five days is also encouraged to call with information. Northampton Co. Sheriff Jack Smith stated he would like for anyone with information to please contact the Sheriff’s Office regardless of how minor they may feel their information is please call, no matter where they have seen her.

WINDSOR – As Craig Clifford Wissink made his initial court appearance here Monday in the murder of a prison... read more