LASKER – Trent Munford pitched a three-hitter and the Bears pounded out a dozen hits as Hertford County beat Northeast Academy 11-1 here Tuesday evening to win the championship of the Sgt. Will McLawhorn Scholarship Tournament.

The Bears became only the second team other than the host Eagles to win the event; the other was Southampton Academy in 2013.

“The guys stepped up big today,” said Hertford County coach Chris Towell. “We were missing three starters but two jayvee players had big games for us in Alden Lassiter and Parker Bradley.”

The Bears opened the scoring with three runs in the top of the first inning. Alden Lassiter walked just before Trevor Lee hit a towering two-run home run over the fence in right centerfield off Eagles’ starter Ryan Rowe and Hertford County had staked itself to a 2-0 lead. Continuing play, Evan Lassiter then singled to left, stole second, and scored on a Bradley Edwards RBI single to right. It was 3-0, Bears, after just a half-inning. 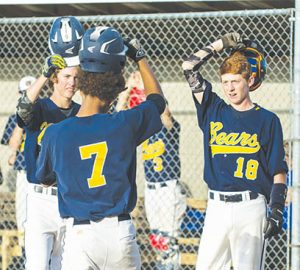 Trevor Lee (#7) is congratulated by teammates Evan Lassiter (left) and Alden Lassiter (right) after smacking a first-inning two-run home run in the championship game of the Sgt. Will McLawhorn Scholarship Tournament in Lasker. The three players accounted for 10 of Hertford County’s 12 hits in the game.

After Northeast failed to score, Hertford County collected another run in the top of the second. Alden Lassiter singled to right, went all the way to third on a pair of wild pitches and scored on Trevor Lee’s RBI single to centerfield. The Bears were then up 4-0 after two complete.

Three more Hertford County runs came across in the top of the fourth. Ezekiel Brooks and Trent Munford drew back-to-back walks before Brooks scored on Alden Lassiter’s RBI single. After a Trevor Lee walk to load the bases, Munford and Alden Lassiter scored on Evan Lassiter’s two-run single to right field. The Bears were now ahead, 7-0.

It was Lassiter driving in Lassiter again in the top of the fifth for Hertford County’s eighth run just before Northeast got on the scoreboard.

In the bottom of the fifth, Ryan Rowe erased the goose-egg for the Eagles with a solo blast to centerfield off Munford that made it 8-1, Bears, after five.

Hertford County’s final three runs came in the sixth on a hit batsman, a single, and a bases-loaded walk. After Northeast failed to score in the bottom of the inning the game was over due to the 10-run rule.

Munford went the distance for Hertford County: six innings pitched allowing a run (the homer) on three hits and he had 11 strikeouts. Rowe and L.J. Barnes pitched for Northeast with Rowe taking the loss.

The Bears had 12 hits. Alden Lassiter was 4-for-4 and drove in a pair of runs. Trevor Lee was 3-for-3 and had four RBI. Evan Lassiter was 3-for-5 with three runs-batted-in, while Chuck Lee and Edwards had the other Hertford County hits.

Rowe had two of Northeast’s three hits, including the home run. Kevin Taylor got the other Eagles hit.

“We played solid defense and had great pitching, and that’s what it takes to win,” added Towell. “I’ve very proud of this team.”

Hertford County won its third straight game – the most in a row for the Bears since April of 2014 – and they improve their record to 6-12. After finishing their Easter break, they will return to Northeastern Coastal Conference play next Tuesday, April 25, in Elizabeth City against Northeastern.