AHOSKIE – Chuck Lee smacked a run-scoring walk-off single in the bottom of the seventh inning that fell in between the outfielders and Hertford County defeated bitter rival Bertie 4-3 here Thursday night.

The Northeastern Coastal Conference game was dedicated to former Bears player Brandon Warren, who is fighting cancer and threw out the ceremonial first pitch. Proceeds from the night’s activities – gate receipts to concessions – were shared to help defer Warren’s mounting medical expenses; and every Bears player wore “Warren” on the backs of their jerseys.

“This team learned more than just baseball here tonight,” said an emotional Hertford County coach Chris Towell afterward. “The fight and determination that Brandon Warren is showing has carried over to the field.”

The Bears opened the scoring in the bottom of the second inning. After Chuck Lee singled to left and Bradley Edwards was hit by a pitch, Edward Bradley reached first on an error to load the bases. Lee then scored the game’s first run when Bertie pitcher Alden Cottle was called for a balk. The Bears led 1-0 after two. 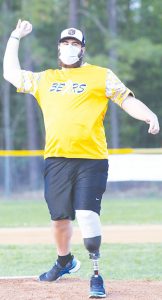 Bertie evened the score in the top of the third inning when Cottle doubled into the gap in left centerfield and scored on Trenton White’s RBI single to left. That knotted the game at 1-1 after two-and-a-half innings of play.

The Falcons had a chance to add to that number in the top of the fourth when lead-off batter Brandon Roberson doubled. But the threat was erased when Roberson was thrown out trying to steal third base. A strikeout and groundout ended the inning.

Hertford County went back in front by a pair in the bottom of the frame when Evan Lassiter drew a walk then went to third on Chuck Lee’s single to center. Lassiter scored on Edwards’ RBI groundout, and Lee scored when Bradley stroked a rope to centerfield. The Bears were now up 3-1 after four.

Bertie cut the deficit in half in the top of the fifth when Zack Castelloe singled to left and went to third when Chris Pierce reached on an error. Cottle then sent a sacrifice fly deep to center, scoring Castelloe, but the Bears still led 3-2 after five.

In the top of the sixth, the Falcons’ Scoop Hoggard singled to left and went to second on Ethan Hughson’s sacrifice bunt. But the threat ended when Hoggard was thrown out at the plate as Jared Speight reached on an error and the score remained 3-2 after six.

The tying run for the Falcons came in the top of the seventh. Castelloe opened with a base-hit to left. Pinch-runner Isom Collins then was sacrificed to second by Bryant Pierce. Nathaniel Cheeseboro then walked and Cottle singled to center to load the bases. Collins scored on a sacrifice fly by Trenton White, tying the game at 3-3 headed to the bottom of the seventh.

For the game-winner, Trevor Lee reached first base on an error, but was erased when Lassiter reached on a fielder’s choice. Lassiter then sent the Bear fans home happy by legging from first to score on Lee’s RBI walk-off hit to right field.

Bertie had eight hits, led by Cottle and Castelloe with two each. White, Hoggard, Roberson, and Speight had the other Bertie safeties. Chuck Lee had three of Hertford County’s nine hits with Kole Liverman and Lassiter smacking two apiece. Tyrek Beverly and Bradley had the other hits.

“It was a good pitching match-up between Alden and Trent,” Towell added. “It was just a fun night to be at the ballpark and a fun night for Brandon Warren.”

Bertie falls to 3-13 overall and 3-5 in conference. The Falcons head to the Tarboro Easter Classic next week; Hertford County raises its mark to 4-12 and 2-6 in league play. The Bears will play Ridgecroft in the first round of the Will McLawhorn Tournament in Lasker at Northeast Academy Monday at 6 p.m.

WINDSOR – Bertie High scored three runs in the first inning and never looked back from there, as the Falcons... read more