Goodwill for good will 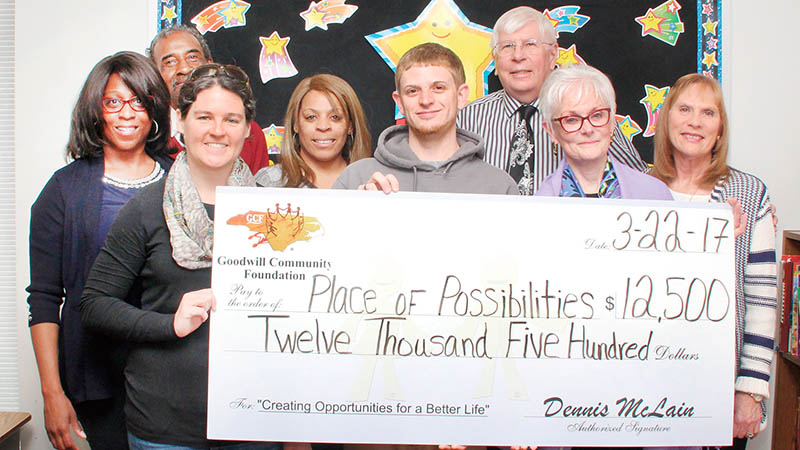 AULANDER – Putting the Rev. Laura Early together with retired minister Dennis McLain is similar to pairing peanut butter with grape jelly; milk with cookies; and/or bacon with eggs.

Good things are bound to happen.

Since the opening of Early’s dream – The Place of Possibilities (PoP) – back in 2010, McLain and his group – Goodwill Industries of Eastern North Carolina – have been major benefactors of the multi-purpose ministry located off Hexlena Road in Bertie County.

Goodwill has stepped to the plate once again, this time providing a total of $25,000 to PoP to assist in the operation of its annual Summer Reading Program. McLain, joined by his wife, Linda, joined with Early and members of the PoP staff on Wednesday of this week to pass along a check in the amount of $12,500 – representing the initial “drawdown” of the total amount.

This year’s reading program (entitled “Athletes, Authors and Agriculture”) will open in mid-June. It will be held from 9 a.m. until 3 p.m. weekdays for six weeks. The program, which can accept up to 60 children, includes a hot breakfast and lunch, plus a snack.

Early and McLain met by happenstance. Neither was aware of the other until Early, attending a Methodist Leadership Conference, was asked to explain to the audience the purpose of PoP, which was under construction at that time. 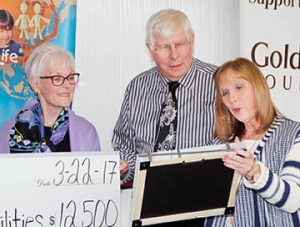 Rev. Laura Early (right), founder of The Place of Possibilities, presents Dennis and Linda McLain of the Goodwill Community Foundation with a token of appreciation.

“As the good Lord would have it, Dennis just happened to be at that same meeting,” Early recalled. “He had to leave before the event was over, but on his way out the door he stopped by where I was seated and told me that we needed to talk.”

That “talk” plus a personal visit by McLain to the facility led to PoP’s good fortune.

“Dennis said he really liked our work here in our area, liked the things we were doing to make life better for those we serve within our local communities,” Early remarked. “One day soon after his visit here, Dennis sent me an email saying that the Goodwill Community Foundation would like to pay off the mortgage on this building plus any interest. We had only been open for six months at that time and we had a pretty hefty debt.”

Goodwill’s good will didn’t stop there, however.

“Dennis and his group have been major benefactors to other programs we conduct here,” Early noted. “This marks the fifth straight year that the Goodwill Community Foundation has fully funded our summer reading program. He has been so supportive in many, many ways, to include matching other grants that we are fortunate enough to receive.”

Speaking on behalf of the Goodwill Community Foundation, which is a global organization, McLain said they look to provide financial assistance to entities that offer education and child development.

“As you well know by living here, the eastern part of our state finds itself in situations that are typical in some third world nations,” McLain said. “We have been focusing on child development, working with that age group to help them find a way out of poverty. It all started for us with the Boys and Girls Club over in Edenton, providing resources.”

McLain said it was easy for him to learn that he and Early shared the same passion for child development.

“Laura and I know that our children are our future; if we don’t provide opportunities for children in rural areas all over the world, our future is in serious trouble,” he stressed.

McLain said he fully understood that parents living in rural areas want to provide better opportunities for their children, but are limited due to the lack of better-paying jobs typically found in metro areas.

“They care about their kids, but they’re struggling just to put food on the table,” he observed. “What Laura does with this place is wonderful. It helps fill the gap and I’ve found that she is very responsible and a great steward of the funds we supply. Seeing the impact this place has made is worth the investments we made.”

Early and McLain’s friendship extends far beyond the love both have for PoP.

“I have traveled with him twice on mission trips to Africa,” Early said. “He’s like me in so many ways, we’re both active outside the walls of our respective groups.”

Meanwhile, PoP has expanded outside the walls of its facility. It has branched out to Hertford and Halifax counties….the latter the site of an old school in Enfield where they use the cafeteria to feed up to 1,200 people per month. That site will also be used this summer for a literacy camp, and additionally work with those with learning, behavioral and physical disabilities. In Hertford County, PoP had transformed the old Union Methodist Church into a coffee house (opened on Saturday nights).

PoP, with a regulation size indoor basketball court, opens its doors every Thursday night for young men to come out and play basketball. Plans are in the works for PoP to partner with the Bertie County YMCA to offer programs at the facility.

The building is also used as a daycare.