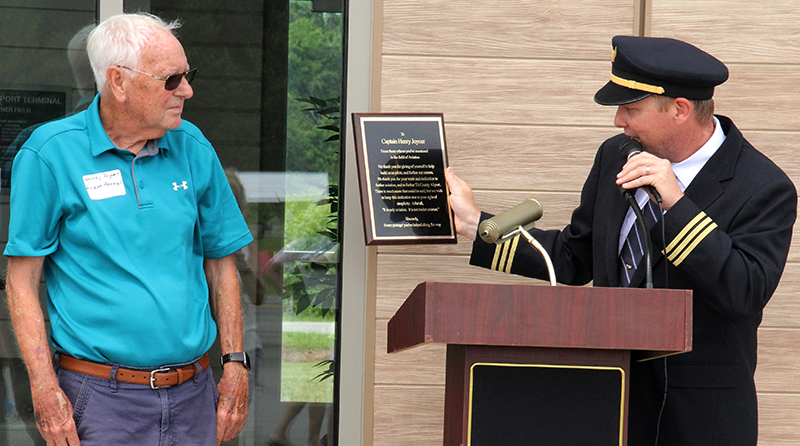 Captain Henry Joyner (left) earned high praise as a flight instructor by his former students, including his son, David (right) who presented a plaque of appreciation to the Tri-County Airport Manager during Saturday’s Open House. Staff Photo by Cal Bryant

AULANDER – Over the course of nearly six full decades, many of those passing by a long strip of asphalt guarded by a “jet on a stick” along NC 561 may not grasp the important role Tri-County Airport has on our local area.

Those attending Saturday’s Open House and Fly-in at the now 55-year-old facility learned an important fact….we have the gateway to the world right here in our own backyard. And they learned of a living legend whose aviation expertise has impacted the careers of many who now earn a living up in the clouds.

The Tri-County Airport Authority hosted Saturday’s event, which attracted a large crowd. Patrons toured the airport’s newly opened terminal, chatted with pilots of several state agencies and others, to include Marine Patrol, NC Wildlife Commission, and the Currituck County Airport Authority along with an aircraft from Elizabeth City State University that promoted its aviation program. There was also a standard helicopter and a gyrocopter parked on the tarmac.

Plane rides were offered to the public.

Another special guest was Jay Johnson, a 96-year-old veteran of World War II.

“What a great turnout on a day where we’ve waited to show off our brand new terminal,” stated Airport Authority chair Tammy Lee. “We cut the ribbon back in February to officially open this beautiful building, but we were all still impacted by the COVID virus at that time, which prompted us to delay the open house until today. 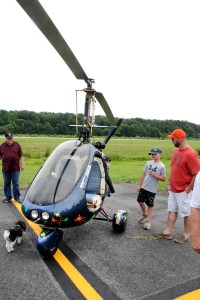 Those attending Saturday’s Open House at Tri-County Airport took the opportunity to view various aircraft parked on the tarmac, to include this gyrocopter hand-crafted by its pilot, David Little of Conway. Staff Photo by Cal Bryant

“Welcome to your airport. We’re mighty proud of our airport and our new terminal. It’s a good first impression of our area by those flying into this airport,” Lee added.

A portion of the event served as a tribute to Henry Joyner, the Tri-County Airport Manager for 41 years. Joyner is also a famed flight instructor, and a few of his former students were on hand Saturday to sing the praises of a man they called “Captain Joyner.”

“Way before I became a commercial airline pilot, I started right here taking flying lessons. I’m just one of many, many people that Henry Joyner taught to fly,” said Brian Knowles, a native of Windsor.

Knowles noted that many do not realize what Tri-County Airport truly means for the Roanoke-Chowan area.

“It’s our gateway to the world,” he stressed. “It’s not just for pilots like me, but it’s your gateway as well.”

Knowles said he took his first flying lesson from Joyner in 1993.

“From the very beginning, Henry explained the risks that are involved with flying,” Knowles recalled. “Even to this day, when Henry and I talk, somewhere in that conversation is about risk. What I’m thankful for is that over the years, Henry has used the experience gained through his own flying career to mitigate some of those risks and then shared that valuable information with other pilots like myself. Henry remains my mentor.”

Knowles acknowledged that today when he is piloting a commercial jet at 35,000 feet, his flight path often takes him over Tri-County Airport.

“I proudly point that out with the people I’m working with that day,” Knowles said. “I’ll tell them stories about this special place and also let them know the reason it’s known today as Henry Joyner Field.”

Chris Smith, a pilot with the NC Wildlife Commission based in New Bern, said he started flying with Joyner in 2006.

“I had never flown before,” Smith said. “I trained for 250 hours and obtained my commercial instrument rating as a pilot.”

Smith laughed when he admitted that he didn’t realize at that time he was being trained by a legend.

“Trust me, I know that now,” he said with a grin. “Across North Carolina, Henry Joyner is known by everybody.”

He shared that even today, when he finds himself in a situation, Joyner’s voice will enter his mind with words of wisdom.

“I think about Henry every day; something clicks in my mind that he taught me,” Smith said.

Jason Smith, a native of Murfreesboro, is another modern day commercial airline pilot whose career began years ago as a student of Joyner.

“Henry was my first flight instructor back in 1993 when I was just 17 years old,” he said. “That was awesome….it was so great having an airport here. The flight instruction was important, but this airport is also important to this community.”

Like the others who spoke on Saturday, Jason Smith stressed that Joyner was and remains a valued mentor.

“I’ve reached out to him many, many times and he continues to guide my career,” he stated.

Before becoming an airline pilot, Jason Smith said he spent 20 years in the U.S. Air Force where he became an instructor.

“Every time one of my guys or gals would solo, I thought about the elation I experienced that first time right here at this airport,” he recalled. “All my aviation skills and personal development as a pilot started right here at what is now Henry Joyner Field.”

“I’m the luckiest of them all as not only is Henry Joyner my flight instructor, but also my dad,” proudly boasted the son. “I grew up as an airport kid. He demanded perfection in flying and laid the foundation for airmanship.

“If I had to count up all the pilots that my dad has impacted over the years, those he gave a license or a rating to, it would easily be over 10,000,” he continued.

David Joyner also shared remarks from two other of his dad’s former students: Butch Bragg of Windsor who is now an aerial firefighter based in Colorado, and Brad Blythe, a native of Franklin, VA who is now a pilot with FedEx based in Germany. Both praised Henry Joyner as a mentor and a lifelong friend.

In recognition of Captain Henry Joyner’s lifetime of work as a trusted aviator and flight instructor, David Joyner presented him with a plaque of appreciation.

And with that, Captain Joyner walked back out to the tarmac, chatting with the public as well as colleagues before taking his turn in the pilot’s seat where he introduced rookie passengers to the thrill found in the wild blue yonder.