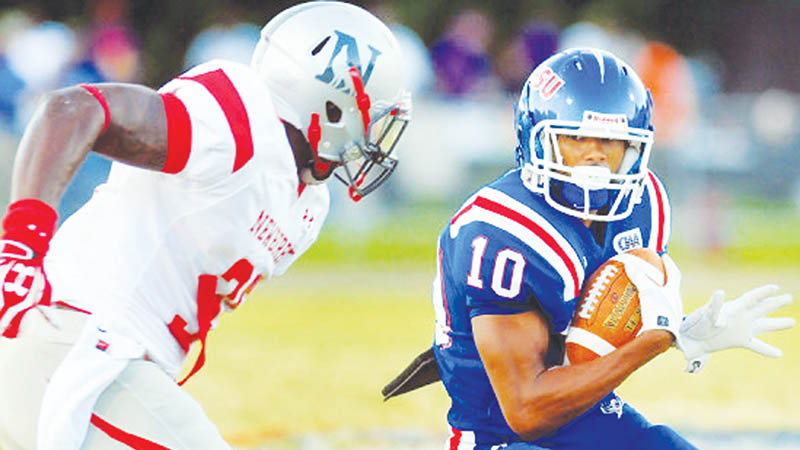 Former Hertford County High and Elizabeth City State football player Montario Hunter is back in pro football. Hunter, who spent the 2016 training camp with the NFL Seattle Seahawks, has been signed by the BC Lions of the Canadian Football League. | File Photo

VANCOUVER, BC, CANADA – A former area high school and college football player is getting another shot at professional football.

The BC Lions Football Club of the Canadian Football League announced Tuesday that wide receiver Montario Hunter has signed with the team.

The 6’1”, 190-pound speedster attended training camp with the Seattle Seahawks in 2016 following workouts with both the New York Jets and Green Bay Packers. He was one of the last cuts as the team parried down to its final 40-man roster.

Hunter is one of 40 players who will take part in a three-day mini-camp taking place in Surrey, BC – south of the capital of Vancouver – April 26-28.

Hunter finished his career with ECSU having caught five touchdowns his senior year. He had over 800 yards receiving, and his 24.7 yards per catch led the nation.

Originally undrafted, Hunter first drew the attention of Kansas City when he attended Pro Day last year at Campbell University in Buie’s Creek. However, on the recommendation of his agent, he passed on the Chiefs and instead went to workouts with both the Jets and the Packers.

“Green Bay wanted me to play cornerback because they said I look physical, but they didn’t want me to come back,” Hunter said from Charlotte at Velocity Sports Performance, where he continues to work out in the off-season with several NFL players and hopefuls.

“One thing I learned from NFL training camps is that the competition level is a lot higher than it was at the college level, but I also learned that I can play at the level and it’s just fun to be out there with guys who want to play pro football as much as you do,” he said.

“I just have to go out there, show my speed, catch every ball, and just work hard,” he acknowledged.

Hunter chose Charlotte because it was the closest workout area where he had family members with whom he could stay while pursuing his dream.

“When I got here I didn’t have an agent, or anything,” Hunter recalls. “But my trainer and speed coach said I had one of the fastest times in the 10 yard dash he’d seen in the last three years. He sent that information off, and that’s how I got an agent.”

At Velocity, Hunter says he’s inspired by all the other pros around him working out.

“(Former Carolina & Ravens receiver) Steve Smith comes in here all the time to work out, and I’ve got lots of NFL guys around me training who’ve been in the league for years.”

Hunter says he will leave for Canada on April 25. As incentive and inspiration, he says he doesn’t plan on returning back to North Carolina anytime soon.