It was the Bears’ first win of the young baseball season.

Hertford County scored nine runs in the top of the first inning and never looked back from there.

Leading 9-0, the Bears tacked on seven more runs in the top of the second inning and lead it 16-0 after two.

Seven more Hertford County runs crossed the plate in the third inning as the Bears hit the 20-run mark, and then some. 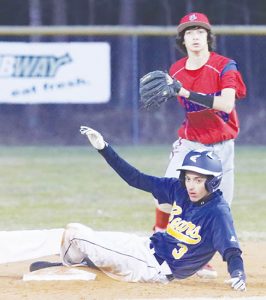 Hertford County’s Gabriel Correa is forced-out at second base in a recent game. The Bears senior more than made up for it Friday going 2-for-2 and scoring three runs in a 27-2 win over Northampton County. | Dynamic Photo / William Anthony

Northampton got on the scoreboard in the bottom of the third when they plated their only two runs of the game, but still the Jaguars trailed 23-2 after three complete innings.

Hertford County scored its final four innings in the top of the fourth for the 27-2 final.

Bradley Edwards led the Bear hit parade with three hits and three runs-batted-in. Tyrek Beverly was 2-for-3 with three RBI, while both Chuck Lee and Gabriel Correa were 2-for-2 with three runs scored each, while Evan Lassiter was 2-for-4 with one RBI.

Lassiter was also the winning pitcher, picking up his first victory of the season. He gave up no runs and no hits while walking a pair and striking out six. Edwards relieved him in the second inning and gave up two runs (all earned) on three hits and he struck out four.

Shyheem Futrell, Deion Jordan, and Jamonta Branch got the only hits for Northampton. Futrell took the loss on the mound for the Jags.