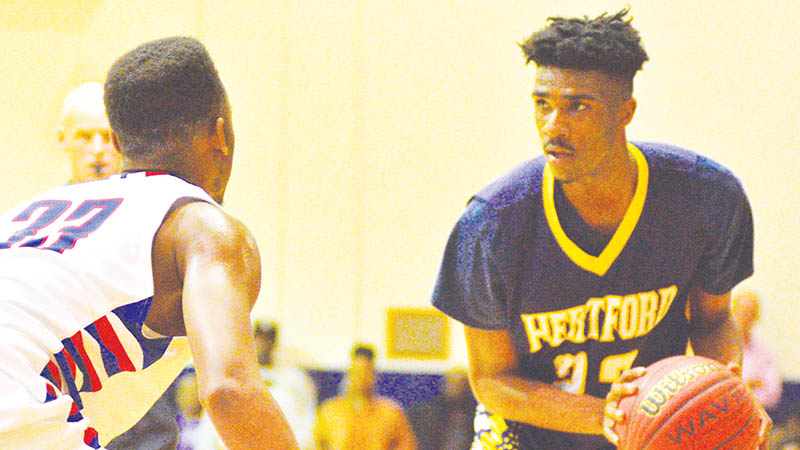 SNOW HILL – Top-seed Greene Central broke out of the gate and never let off the gas here Tuesday night as the Rams rolled their way to a 62-42 win over Hertford County in the semi-finals of the NCHSAA 2A boys basketball Eastern Championships.

Greene Central (26-1) will face undefeated Jacksonville Northside in the Eastern championship in Fayetteville on Saturday. Hertford County ends its season at 20-9.

Imajae Dodd led all scorers with 22.

“We struggled offensively,” said Bears coach Charles Simmons. “It was not a great effort by us on offense and Greene Central is a very good team.”

The Rams ‘rammed’ their way to the game’s first 10 points – eight of them by Dodd, and four of his coming on a pair of monster dunks. The Bears got on the board at the 2:40 mark of the first quarter when Roberson hit a short jump shot. But back came Greene Central with five more points – three on a three-pointer. Roberson was the entire Bears’ offense in the opening frame as he got two more buckets from the floor to fall, but Hertford County was also in a 15-6 hole after the first period of play.

Talik Totten rattled in a triple and Rayshawn Beamon knocked in a short jumper from the corner to get Hertford County within four at 15-11. But the Rams matched the Bears with a 5-0 run of their own – the last two points coming on a crowd-pleasing alley-oop – before Beamon tickled the twine with another trey that made it 20-14, Greene Central. Taking advantage of their size, the Rams pounded it inside on the shorter Bears and soon were up by a dozen, 26-14. Roberson got off one more good shot before the horn as the teams headed to the locker-room with Hertford County trailing by ten, 26-16.

Much like in the first half, the Rams opened the second half with a 9-0 run this time, highlighted by more alley-oops, as part of an 11-2 run to start the third quarter. Lance Hunter’s bucket with 4:07 left in the quarter got Hertford County on the board and after that they matched shots with the Rams, but were in way too deep a hole. DonQuez Davis – who had 10 assists in the quarter – drove the lane at will and his two free throws gave Greene Central its largest lead at the time – 19 points – at 43-24. Late buckets by Riddick and Totten helped reduce the deficit to 15, at 43-28, headed to the fourth.

Greene got their first 20-point lead of the night on a dunk by Dodd that made it 48-28. Eventually they increased it to 21 points (58-37). The Bears tried to counter the Ram inside attack, but ended up getting saddled with a slew of foul calls. The normally-reliable three-point shooting for the Bears was non-existent (3-for-27) as the closest Hertford County came in the final quarter was 15. After a Deandre Beverly free throw for his only points of the night, the Bears’ final field goal of the year came when Riddick’s soft jump shot sailed through the rim, ending the game on a 20-point note, but leaving the Bears as one of just eight total teams left in North Carolina still playing high school basketball.

“We had a good season,” said Simmons. “I’m super proud of this team; it was a great accomplishment to get to the fourth round. This was great for the school and for the program.”

Roberson was the only starter of the Bears’ four seniors – Beverly, Beamon, and Dana Goodman were the others – Simmons will lose off the team for next year.

“(The team) bought into what we wanted to do,” concluded Simmons,” and that’s how you play Hertford County basketball.”