AHOSKIE – Of the 64 boys basketball teams across the state that opened the NCHSAA Class 2-A play-offs last week, only eight remain.

Hertford County High School is included among the “Elite Eight.”

Junior forward Talik Totten poured in a game-high 28 points as the Bears advanced to the Eastern Region semifinals with a 71-56 win over Roanoke Rapids High School here Saturday night.

With the win, the Bears (20-8 overall and seeded sixth in the Eastern bracket) advanced to tonight’s (Tuesday; 7 p.m.) game at top-ranked Greene Central High School (25-1). It marks only the third time in HCHS history that the Bears have advanced this deep into the state basketball play-offs. 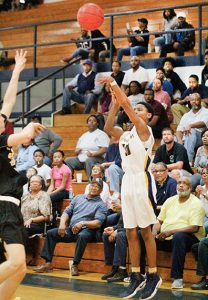 The crowd looks on as Hertford County’s Talik Totten launches a three-point shot during Saturday night’s home game vs. Roanoke Rapids. Totten swished the nets on five, long-range bombs, part of his game-high 28 points, that aided the Bears in their 71-56 victory. | Staff Photo by Cal Bryant

“I was very pleased with our effort,” said HCHS head coach Charles Simmons following Saturday night’s victory. “We were able to start fast on the offensive end, and we did some good things defensively. Plus I thought that our rebounding was much better than the effort we had (on Thursday) against Warren County (a narrow 70-68 win by the Bears, despite a decisive edge on the glass by the visiting Eagles).”

Against Roanoke Rapids, Simmons ordered a trapping defense just past the midway mark of the first quarter in an effort to change the game’s tempo. The Bears were trailing 7-6 at that point and the coach’s orders were right on time as HCHS used a couple of turnovers and missed opportunities on offense by the patient Yellow Jackets to change the flow of the game.

From that point, HCHS closed the first quarter on an 11-4 run to open up a 17-11 lead. Lance Hunter fueled that effort with three baskets while Totten bombed in a deep three-pointer.

The lead grew to double digits (22-11) in the early stages of the second quarter thanks to a deuce from Jaquarii Roberson and an old-fashioned three-point play by Totten.

Sparked by a deuce and a trey respectively from Dre Terry and Tyjarek Simmons, Roanoke Rapids responded with a run of six unanswered points to draw to within 22-17. However, Totten took the sting out of the Yellow Jackets rally by swishing the nets on back-to-back treys. He then added a deuce and another long-range bomb, part of a 14-1 run that allowed the Bears to open up their largest lead of the game at 18 points (36-18).

After Roanoke Rapids closed to 38-30 early in the third quarter – an offensive spurt highlighted by a trey and two free throws from Quincy Vann and a three-point play by Simmons – the Bears kicked their offense back into gear.

A bucket by Zion Riddick started that effort, which was followed by another trifecta from Totten and a hoop and two free throws by Roberson that extended the lead back to double figures at 47-37. 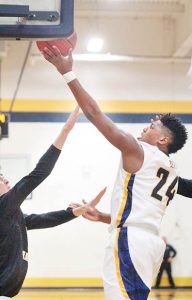 Lance Hunter (right) muscles inside for two of his 15 points that helped Hertford County beat Roanoke Rapids and earn the Bears a spot in tonight’s (Tuesday) Eastern Class 2-A semifinals. | Staff Photo by Cal Bryant

Even when Simmons gave the ‘Jackets some life with a three-pointer, which drew the visitors as close as 47-40, the Bears were able to answer. Totten drained consecutive baskets and Hunter muscled inside for a bucket as HCHS closed the third quarter with a 6-2 run and a 53-41 cushion heading into the final eight minutes of play.

“We kept our heads in the game and kept on battling when they made their runs at us,” noted coach Simmons. “And we able to convert from the free throw line down the stretch in the fourth quarter.”

Roanoke Rapids did manage to remain within striking distance late in the game, trailing only by eight (61-53) after a 10-0 run sparked by a deuce and a trey from Paul Whitby, but HCHS did indeed maintain control from the charity stripe. Hunter and Totten made all four of their free throw attempts over the game’s waning moments while Roberson drained both of his charity tosses.